Actually, Robert Gibbs Doesn’t Have A Lot Of Bad Things To Say About FNC
video

Actually, Robert Gibbs Doesn’t Have A Lot Of Bad Things To Say About FNC 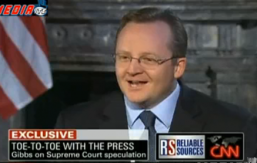 It’s rarely a good sign when the messenger becomes the story. And that is exactly what has happened to Press Secretary Robert Gibbs in the last week or so. Rumors have been swirling for a while now at the brewing resentment towards Gibbs in the White House press corps. and apparently things were serious enough (not to mention somewhat aggravated by last week’s long WaPo feature on Gibbs) to merit a sit-down this weekend between the Press Corps and Gibbs in order to clear the air. Ed Chen, a White House correspondent for Bloomberg News who is president of the White House Correspondents’ Association told Politico’s Mike Allen that in his “10-plus years at the White House, rarely have I sensed such a level of anger, which is wide and deep, among members over White House practices and attitude toward the press.”

Gibbs followed up this tete-a-tete with a (taped) appearance on Reliable Sources this morning where after a few quick nods to the SCOTUS selection process Howie Kurtz quickly turned the talk to Fox News and the cable news cycle in general. This exchange in particular was rather humorous since I am always interested in how people can dislike strongly something they never watch.

KURTZ: How much cable news does the president watch?
GIBBS: Very little, and…
KURTZ: How does he know how bad it is?
GIBBS: … that makes — well, he watches — you don’t have to watch much of it to watch — to watch the — the world wide wrestling impact of how issues are bantered around.

Some impressive backpedaling there. Meanwhile, is the White House softening in its approach to the ‘wrestling’ that goes on on Fox News? Gibbs’ remarks regarding the news network are bordered on genteel compared to some of the criticism we’ve heard from the administration in the past (and from others outside it today).

KURTZ: Let me ask you about Fox. The — the White House campaign against Fox News. Did that end when Fox’s Bret Baier was invited into the Oval Office who a lot of people have called, “The interrupt-athon interview?”

GIBBS: Well, I’ll let Fox determine whether or not they got out of that interview what they wanted to get out of it based on the fact that — I mean, I think the uniqueness of having an interview with the president is getting a chance to sit as close as we are and getting that insight.

I mean, he could – this is the last interview the president did before something as historic as healthcare passed. I don’t think historians will look back on that interview and think, “Boy we really got a sense of what the president was thinking right before such a historic achievement”…

GIBBS: Howard, I’ll say this. That — that we are, as you said, we — we live in a town in which you have to play the game. And — and we’re happy to put guests on. We’re happy to do interviews. Obviously I take questions from their correspondent each and every day in the briefing. I — I don’t think many people have to watch Fox to understand the — the political slant that they have.

KURTZ: You mean the news coverage as well as the opinion shows?

[…]Well, again, their [Fox News] stature is largely elevated by the people that listen. Again I — I think it’s one of those things where if you’re not — you know, you have in all — I think in a lot of different phases of the media people can make statements that aren’t checked, right? The media in some cases covers the food fight, but doesn’t necessarily check who started it and whether they started it for a reason that was legitimate or not.

Short version: Cable news segments are too short, Fox News coverage has a political slant, the cablers turn everything into a shout fest. Nothing new, or all that terrible here! To that point, it’s probably worth noting that the White House and Fox have been on comparatively good terms for a while now, the Baier interview being more of a recognition of that than a starting point. Actually, perhaps the most interesting part of the segment was what Kurtz didn’t ask Gibbs, namely, how does he feel about all the recent criticism of him from inside the press corps ranks. Video of the segment below.