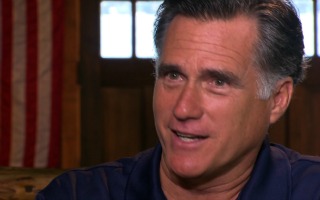 “As president, Mitt will nominate judges in the mold of Chief Justice Roberts and Justices Scalia, Thomas, and Alito,” reads Mitt Romney’s campaign website. That list is about to get smaller by one, it seems, as Romney told CBS News’ Jan Crawford on Thursday that he would no longer support a judge like Chief Justice John Roberts due to his having cast the deciding vote to uphold the Affordable Care Act.

Asked by Crawford whether he would still support the nomination of a justice like Roberts to the Supreme Court following his controversial decision which cut against the wishes of many conservatives that hopped the ACA would be struck down, Romney suggested that would be unlikely.

“Well, I certainly wouldn’t nominate someone who I knew was gonna come out with a decision I violently disagreed with — or vehemently, rather, disagreed with,” Romney said. “And he reached a conclusion I think that was not accurate and not an appropriate conclusion. But that being said, he’s a very bright person and I’d look for individuals that have intelligence and believe in following the Constitution.”

Crawford asked what the former Massachusetts governor thought about the logic that governed Robert’s decision to uphold the individual mandate within the ACA as a tax. Romney said he thought the Chief Justice was motivated by something other than the law when casting his vote.

“Well, it gives the impression that the decision was made not based upon constitutional foundation, but instead political consideration about the relationship between the branches of government,” said Romney.

He concluded, however, by saying that no one could know for sure and would not know until Robert’s himself “speaks out.”