Ron Paul On The So-Called GOP Civil War: ‘We Live In Revolutionary Times’ 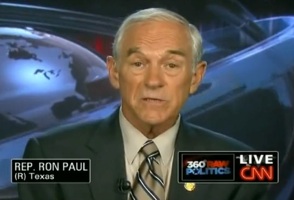 Producers at AC 360 had maybe the smartest booking of last night’s cable news slate when they had on as guest the former GOP Presidential hopeful and Tea Party coiner Ron Paul to provide context to the so-called “GOP Civil War,” brought about by Christine O’Donnell’s stunning victory in Delaware. Anderson Cooper cut right to the chase when he asked if there was still room in the Repubican party for a moderate like Mike Castle. Paul contextualized the current political climate “we live in revolutionary times.”

Ron Paul was able to discuss in great detail how the Tea Party movement is affecting the political landscape in both measured and passionate terms, simply summing up by saying “there’s a lot of unhappiness in this country” and “hardly anyone trusts the government anymore, and for good reason.” Though the entire interview is filled with well-reasoned and thoughtful discourse, a rough transcript of the heart of the interview is excerpted below:

Ron Paul: Sure. Probably depends on the state but we live in revolutionary times. What we’re witnessing today is change coming from the grassroots. I have noticed over the many years that presidential candidates always campaign on change and they never get it. But change, real change only comes philosophically from the grassroots, when the people endorse certain views or condemn certain views. And that’s what’s happening this time. This only happens once maybe in two or three lifetime.

Cooper: And you really believe this is a revolutionary time?

Paul: Oh, yeah. But it’s economics. I see everything in terms of economic policies, and that’s what drives everybody. That’s what makes people so angry and upset. You think if there were no economic problems this would be going on? This is the end of Keynesianism. It’s been with us 70 years and it’s failing. Even the liberals know it’s failing. It’s sort of like revolutionary end of an age with the downfall of the Soviet system. It finally just didn’t work. You didn’t have to fight anymore it didn’t come from the leaders it came from the grassroots and that’s what’s happening right now. The grassroots knows that government fails. even today statistics say hardly anybody trusts the government anymore. And good reason.

Paul’s ability to convey emotional issues in a calm and collected way always makes us wonder why he’s not a more prominent face of the Tea Party movement. Because it seems like if he were to play a larger role, the Tea Party would gain a lot more traction with independents cowered by the fear of a crazy and sometimes racist group as its often portrayed by many left-of-center outlets.