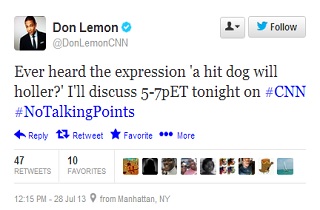 CNN anchor Don Lemon incurred the wrath of many people when he not only agreed with Fox News host Bill O’Reilly‘s indictment of “black culture,” but asserted it hadn’t gone far enough. It’s an interesting coincidence, then, that both Lemon and Ted Nugent, another member of the growing cadre of media figures attempting to normalize racial profiling in the wake of the Trayvon Martin killing, have recently employed canine metaphors to describe the black community.

The reaction to Lemon’s commentary was swift, and at times brutal, but rather than respond to the concerns raised by critics, Lemon put together a panel segment with people who agreed with him, and mischaracterized the backlash as a reaction to common sense fashion and linguistic advice. He failed to acknowledge the laundry list of legitimate criticisms of what he said, and how he said it.

The main thrust of the criticism has been that Lemon’s rant was simplistic, ignoring the root causes of the symptoms his advice was meant to treat (like the effects of arrest and sentencing disparities, or employment discrimination, or being murdered, on families), and was made in the context of agreement with a segment of white America that explicitly promotes the legitimacy of the racial profiling that cost Trayvon Martin his life. Even on a topic on which many, myself included, would philosophically agree with Lemon, he fails to recognize that if black people had a nickel for every time a black person used the n-word, it would be because white people gave the other 95 cents to iTunes. He also claimed that white people don’t litter, which is some bullsh*t.

In order to promote his upcoming segment on criticisms that no one actually made of him, however, Lemon tweeted this tease:

Ever heard the expression ‘a hit dog will holler?’ I’ll discuss 5-7pET tonight on #CNN #NoTalkingPoints

Lemon’s tweet, although divergent in intent, bears an illustrative similarity to remarks made by Ted Nugent last week, during a Nick Cannon podcast that Media Matters flagged. Like Bill O’Reilly, Nugent has been arguing that racial profiling is not only reasonable, but essential, due to a “mindless tendency to violence” in the black community. In making this argument to entertainer Nick Cannon, Nugent went to the dogs.

Earlier in the show, Nugent repeated his boast that he has been “fighting racism” for years by generously thanking the black artists he and the rest of white rock ripped off, and by employing a black bassist. He then addressed remarks that President Obama made, in Nugent’s imagination, about white ladies on “helicopters” clutching their purses, before getting to racial profiling.

“I think when you use the word profile, if a Dalmatian has been biting the children in the neighborhood, I think we’re going to look for a black and white dog,” he told Cannon, later adding that “over and over again I watch the news and here’s a rape and here’s a burglary and here’s a murder in Chicago. 29 shot. 29 blacks shot by 29 blacks. At some point you got to be afraid of black and white dogs if the Dalmatian’s doing the biting.”

Media Matters cuts their clip off a little too early, though, because rather than pointing out that racial profiling necessarily entails treating the innocent (including the victims) as offenders, Nick Cannon tries to argue the effects of poverty, but ends up detouring into arguing that black people have no choice but to become “vicious animals.”

“Obviously, this is just a reaction to the way society has… our place in society,” Cannon said, “and expressing years and years of not being treated properly by the establishment, or the white community, especially in impoverished…you’re from Detroit, you know when a city is downtrodden, of course there’s gonna be violence, there’s gonna be frustration, there’s gonna be anger, and if all you, to use your analogy, if you have two dalmatians in a cage, and all they have is each other to go after, that’s what they’re gonna do, they’re just gonna become a victim of their circumstance. No one’s giving them that opportunity to step up, or given them the alternative to operate, then they’re gonna become a vicious animal, as you call it.”

It’s worth noting that Nick Cannon is not a respected journalist on a prestigious cable news network, but one of the many problems with Cannon’s response is, of course, that the vast majority of black people aren’t “going after each other,” or anyone else. Hadiya Pendleton wasn’t going after anyone, she was minding her business, but the “black-on-black crime” narrative insists that her death is her problem, as a member of the black community. Don’t talk about racism, talk about how these people are bringing it all on themselves. These screeds about black crime and out-of-wedlock births are all presented, explicitly, as critiques of “the black community,” and so was Don Lemon’s rant.

Neither of these men actually thinks of black people as dogs, but their shared use od the metaphor is instructive. In Lemon’s case, it was a way to dismiss the legitimate, well-reasoned disagreement of #blacktwitter as so much reflexive, mindless howling, while Nugent used it to dismiss the humanity of people whom he sees as legitimate targets of suspicion. That bit of common ground should give at least one of these guys paws.