Debbie Gibson, one of the women who has spoken out with allegations against Roy Moore, has provided the Washington Post with evidence that Moore does know who she is.

Gibson initially told the Post she was 17 when Moore approached her and asked her out:

Gibson says that they dated for two to three months, and that he took her to his house, read her poetry and played his guitar. She says he kissed her once in his bedroom and once by the pool at a local country club.

“Looking back, I’m glad nothing bad happened,” says Gibson, who now lives in Florida. “As a mother of daughters, I realize that our age difference at that time made our dating inappropriate.”

But the Post‘s new report today says Gibson found an old scrapbook in her attic a few days ago and came across a graduation card he wrote her.

The card allegedly written by Moore says, “Happy graduation Debbie. I wanted to give you this card myself. I know that you’ll be a success in anything you do. Roy.” 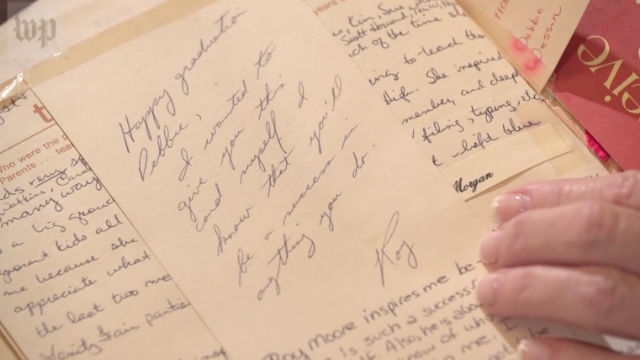 Moore had said he knew Gibson, but that he didn’t remember dating her. More recently, he has denied knowing any of the women who have come forward.

You can watch Gibson show off the card in the video above, via WaPo.