Giuliani Slams Huffington As “The Worst Offender” Of Personal Attacks 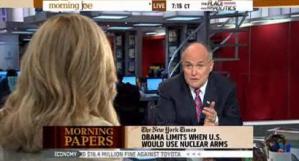 MSNBC’s Morning Joe had an all-star panel of politically diverse guests this morning for a lengthy discussion about foreign and domestic policy – but former New York City Governor Rudy Giuliani‘s presence was what set off the real politics.

All he really wanted to do was endorse Florida GOP candidate Marco Rubio. But Arianna Huffington went after Giuliani over the past, and Joe Scarborough fired back.

Also joining the panel were Gene Robinson and Mort Zuckerman, but with Giuliani hitting the Obama administration for getting “pushed around” internationally, Huffington was poised to pounce. It took Giuliani’s description of Obama’s “inexorable move toward European social democracy” (a wordy, east coasty version of just calling the guy a “socialist”) to get Huffington calling Giuliani’s comments “so over the top.”

“Your judgment in people has not been stellar,” she said, after Giuliani made his Rubio case. “Bernard Kerik, anybody?

Scarborough joked back at first. “Arianna I don’t want to bring up the fact that I first met you when you had a warm embrace of Newt Gingrich,” he said. “Do you really want to go back to the 1990s?”

Giuliani called the Kerik comment a “cheap shot” and said he was “also responsibly largely for the turnaround of New York City.” But Huffington was just getting started – she hit Giuliani over his waterboarding stance, and later, described him as “a man who spent 50 million dollars in the presidential race and got one delegate.”

Scarborough took the lead on the response: “If we’re gonna do this, Arianna, understand we’re going to talk about your race in California. You ran for Governor in California and it was a complete flop.”

All this got Giuliani to call Huffington “the worst offender” of personal attacks, after she had criticized the tea partiers for theirs earlier in the show. All in all, what you’d expect from Morning Joe – crack for the political junkie.

Here’s the key part of the debate – the last 10 minutes: