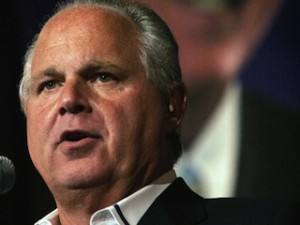 Rush Limbaugh took Mitt Romney to task for his flip-flopping on the Occupy Wall Street protesters on his show Monday, saying the former Massachusetts governor at first was “pounding” the Occupy movement but is now adopting a stance that’s markedly more empathetic.

“I know what the reason is — it’s fear,” Limbaugh said. He says that the Republicans have decided they need to “get in on that action” one way or another, suggesting that they’re looking at polling numbers and thinking that they have to embrace the movement.

Limbaugh later accused President Obama of being behind the Occupy Wall Street movement, saying that it was driven by Tea Party envy from left-leaners. “The Democrats are so jealous of [the] Tea Party, they can’t see straight,” Limbaugh said. “Obama’s responsible for this. This kind of thing is not spontaneous, they didn’t bubble up out of nothing; they’ve had to create this, they’ve had to pay for it. They’re advertising.”

He then went on to bring up email exchanges between journalists like Dylan Ratigan and Matt Taibbi, which show the duo –among others — advising the OWS protesters. Taibbi took to his Rolling Stone blog to defend the emails, saying that most of the advice he was giving was stuff he had posted publicly in a blog article anyway. “In my case,” Taibbi explains, “what I wrote was almost an exact copy of my Rolling Stone article last week, suggesting a list of demands for the movement. I said I thought having demands was a good idea and listed a few things I thought demonstrators could focus on. Others disagreed, and there was a friendly back-and-forth.”

Listen to Limbaugh’s take on the Republicans and their sudden embrace of the OWS movement, as well as his theory that Barack Obama is behind the movement below (while staring at a cute photo of him):