Limbaugh Doubles Down On Yesterday’s Comments: “Put Yourself In My Shoes” 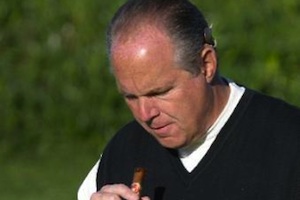 Like Glenn Beck and Sarah Palin, Rush Limbaugh is taking that whole “being connected to a mass murderer” thing pretty personally. You’d think, at this point, he’d be old hat at it but, instead, he seems to think the fact that this has been happening since the 90s makes it even worse. So, today on his radio show, he passionately defended himself against heat for comments he made yesterday. You see, some people took that whole “Democrats are fully supporting the guy who shot their colleague” thing kind of personally too.

He started by bringing up the Good Morning America interview with Zach Osler, in which the gunman’s former friend explained the Jared Loughner didn’t watch the news and wasn’t motivated by politics. Again, Limbaugh pointed out, more proof that any blame falling on his own shoulders is completely ridiculous. Then, responding to criticism of his comments from yesterday, he asked listeners to put themselves “in [his] shoes.”

“Here we have a deranged, obviously mentally insane young man who has fired and killed people and wounded others. On Saturday, I was in my home watching NFL football. I happened to be alone. I haven’t been to Tucson, Arizona in 20 years. And, all of a sudden, I read it’s my fault. And I’m hearing people saying it’s my fault and that it’s inspired by me and what I do. I want you to put yourself in my shoes.”

You can feel for for Limbaugh although his comments yesterday certainly seemed to go directly against the very politicizing claims he had made against The Left (whether they were a response or not). And, though Limbaugh got merely a fraction of the pressure that Sarah Palin got following the tragedy (“the heat” as Beck put it), it must be horrible to have people trying to claim there’s blood of this nature on your hands.

Still, to paraphrase what I wrote in that post about Beck and Palin on Monday: Rush Limbaugh was not the perpetrator here. Jared Loughner was. However, we also shouldn’t view him as the victim. Not when people are dead and he’s been profitting plenty from the backlash against the Democrats backlash.

Check out the audio from his show below: