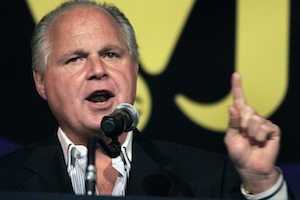 A month ago, the online Jewish topics magazine Tablet published an article about actors being paid to call in to radio shows and pretend to be real callers. While Tablet didn’t name any specific shows that used the fakes, they mentioned that it was a service run by Premiere Radio Networks which, they pointed out, syndicates the radio shows of “Rush Limbaugh, Glenn Beck, and Sean Hannity.” It wasn’t too hard for many people who read the piece to make the leap that those shows engage in the practice. Today, on air, Limbaugh vehemently denied the allegations.

In a diatribe spanning across a commercial break, Limbaugh accused Tablet of being “Leftist,” promised that he would take it as an insult if anyone suggested he should use actors, and explained that you “couldn’t script” the stuff on his show. He did say that fakers did call in sometimes, however, they weren’t hired by him. They were just Liberals trying to sneak their way onto the air.

It was a lengthy, passionate defense, yet I’m sure many listeners were, like me, distracted by one simple thought: How freaking sweet would that gig be if it actually does exist? Tablet says these actors make $40 an hour and they typically work an hour a day! Just to call in and improvise with a radio host for a while? That’s incredible! Seriously, I don’t know whether to publish this post or just put up a link to my Resume.

Premiere On Call, I don’t care what shows you do. Just contact me.

Listen to the segment from Limbaugh’s show below: