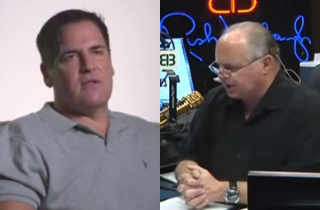 On Friday, Rush Limbaugh opened his radio show by diving into recent comments Dallas Mavericks owner Mark Cuban made about how own struggles with “bigotry” and “prejudice.” Limbaugh did not seem to have any particular problems with what Cuban said, but was rather offended by his subsequent apology to Trayvon Martin’s family for using a “black kid in a hoodie” as one example of who he would avoid on a dark street.

Limbaugh said that instead of apologizing, Cuban should have said he “misspoke” and really meant to say this:

“There is nothing more painful to me at this stage in my life than to walk down the street and hear footsteps and start thinking about robbery — then look around and see somebody white and feel relieved.”

Of course, as the host revealed, that is quote by Rev. Jesse Jackson dating back to 1993. The fact that the prominent black leader had made a similar comment to Cuban’s was also cited by Fox News’ Greg Gutfeld on The Five Thursday afternoon.

“Sound familiar?” Limbaugh asked. “The Reverend Jackson said that in 1993 and nobody tried to shake down his organization because of that.” As for Cuban’s apology, Limbaugh exclaimed, “Hoodie! We can’t say hoodie now! We’ve got to say the ‘h-word.'”

“So it looks like we’re going to have to strike ‘hoodie’ from the English language,” he added, “or at least shorten it now and refer to it as the ‘h-word.'”

And you can watch Cuban’s full remarks below, via Inc.: