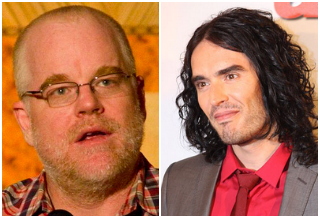 As a recovering drug addict himself, comedian Russell Brand has a lot of strong views about the futility of drug prohibition laws. In a new column for The Guardian, Brand using the recent heroin overdose death of actor Philip Seymour Hoffman to delve into America’s “extremely stupid drug laws” and what he believes could be done to prevent the deaths of more addicts in the future.

Brand begins by comparing Hoffman’s death to the hypothetical demise of Justin Bieber or Miley Cyrus. While we are “invited to anticipate daily” stars like those two dying in some tragic way, Brand says, Hoffman’s death came as a complete surprise. “A middle-aged man, a credible and decorated actor, the industrious and unglamorous artisan of Broadway and serious cinema?” he asked. “The disease of addiction recognises none of these distinctions.”

He then shares some insight on the mind of the addict:

In spite of his life seeming superficially great, in spite of all the praise and accolades, in spite of all the loving friends and family, there is a predominant voice in the mind of an addict that supersedes all reason and that voice wants you dead. This voice is the unrelenting echo of an unfulfillable void.

Addiction is a mental illness around which there is a great deal of confusion, which is hugely exacerbated by the laws that criminalise drug addicts.

If drugs are illegal people who use drugs are criminals. We have set our moral compass on this erroneous premise, and we have strayed so far off course that the landscape we now inhabit provides us with no solutions and greatly increases the problem.

Brand goes on to declare, “we know that prohibition does not work” and “no self-respecting drug addict is even remotely deterred by prohibition.” Instead he points to countries like Portugal and Switzerland that have “introduced progressive and tolerant drug laws” and in turn “have seen crime plummet and drug-related deaths significantly reduced.”

“Now we are aware that our drug laws aren’t working and that alternatives are yielding positive results, why are we not acting?” Brand asks. “Tradition? Prejudice? Extreme stupidity? The answer is all three. Change is hard, apathy is easy, tradition is the narcotic of our rulers.”

More rhetorical questions follow: “Would Hoffman have died if this disease were not so enmeshed in stigma? If we weren’t invited to believe that people who suffer from addiction deserve to suffer? Would he have OD’d if drugs were regulated, controlled and professionally administered?”

Ultimately, Brand views Hoffman’s death as something that was “unnecessary” and could have been avoided if we could only get past the “traditional, prejudicial, stupid” roadblocks in the way of change.