Russell Brand: Bill O’Reilly Is On the Brink of Becoming Howard Beale
video

Russell Brand: Bill O’Reilly Is On the Brink of Becoming Howard Beale 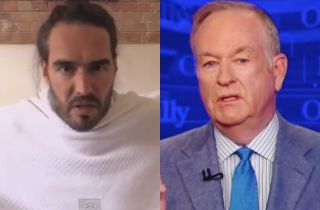 In his newest online video, Russell Brand commented on Bill O’Reilly‘s continuing support of Donald Trump for his refusal to change himself for media standards of political correctness. Brand found it interesting that O’Reilly could be so indignant about how the press has treated Trump in the wake of his repeated controversial statements.

While going over O’Reilly’s Factor “tip of the day” about how the media is not looking out for the best interests of their audiences or their interviewees, Brand said that he was getting a Howard Beale-ish impression from him.

For those who have never seen the acclaimed film Network, Beale is an anchorman for a fictitious news show that uses him for ratings when he decides to speak with no filter about all the “bullshit” he sees in the world. You can watch his most famous rant for context here:

To this, Brand thought that O’Reilly was on the cusp of going down the same road:

“You think for a moment, ‘Oh my God, Bill’s on the precipice of telling the absolute truth, of saying, I’m part of the problem, I work for Fox News day after days, I’ve been representing corporate interests, I’ve been sticking up for Rupert Murdoch, Donald Trump, unseen figures whose name you’ll never know because they’re so ensconced in power, their power continually veiled, but I’m mad as hell and I’m not gonna take it anymore.’”

Brand conceded that O’Reilly was correct about media manipulation, but noted the irony about how he himself is part of the media. Brand wondered what sort of thinking allowed O’Reilly to separate himself from that construct, while everyone else, including Brand, continues to focus on Trump.

You can watch the video here: