Santa Claus May Be The Reason Children Are Fat 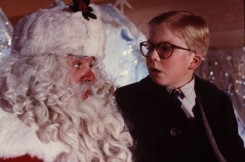 Someone alert Bill O’Reilly. The war on Christmas may have extended its reach to include Santa Claus. Or at least Santa Claus’ lifestyle! Santa’s a bad role-model and a public health menace and he may be making children FAT. Also spreading Swine Flu. From the AP:

Public health expert Nathan Grills of Monash University in Australia says the beloved Christmas icon should ditch his sleigh and start biking or walking to lose his jelly belly. After conducting a [“light-hearted”] literature review, Grills identified a “very high Santa awareness” among children. He determined that Santa made a reckless role model, noting his frequent cookie snacks, occasional cigars and refusal to don a helmet during “extreme sports such as roof surfing and chimney jumping.”

“Santa is a late adopter of evidence-based behavior change and continues to sport a rotund, sedentary image,” Grills wrote. He also found a correlation between countries that celebrate Santa and large numbers of fat children.

…He suggested that jolly old Saint Nick should swap his traditional snacks of cookies and milk in favor of sharing carrots with Rudolph. More disturbingly, Grills said Santa’s close-up contact with sniffling, coughing kids made him a one-man outbreak waiting to happen, with swine flu the biggest seasonal concern. “Unsuspecting little Johnny gets to sit on Santa’s lap, but as well as his present, he gets H1N1 influenza,”

Emphasis mine. Sigh Santa. Is nothing sacred, etc. I can guarantee you if someone had left carrots out in my house as a child I maybe would not suffered under the bad influence of all those Barbie dolls left nicely wrapped under the Christmas tree. Anyway, it’s Christmas, go eat some candy and be jolly. Hopefully these helpful researchers don’t alert PETA about the Easter Bunny.