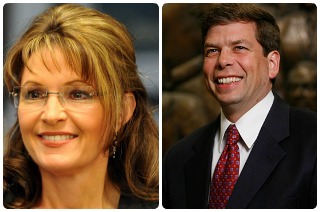 “Really, Mark? Really?” This was how former Alaska Gov. Sarah Palin opened a post on Facebook responding to Sen. Mark Begich (R-AK) who dismissed the former governor expressing interest in a potential bid to challenge him in 2014. In the post, she said that many Alaskans hope to see “great changes for our great state following the upcoming 2014 election.”

Margaret Thatcher used to say, “I always cheer up immensely if an attack is particularly wounding because I think, well, if they attack one personally, it means they have not a single political argument left.” So, thank you, Mark Begich, for making me and others exceptionally cheery today!

“Mark, after looking at your voting record I can see why you are looking for a distraction,” Palin asserted. “You have voted FOR Obamacare, FOR massive tax increases, FOR carbon taxes which could cost Alaskans 21,000 jobs, AGAINST pro-life legislation, and there’s so much more. You even flip-flopped to oppose the nation’s balanced budget amendment.”

RELATED: Alaskan Senator Fires Back At Palin’s Potential 2014 Run: She Might Not Even Be Alaska ‘Resident’

She closes by noting that Begich is part of the “ol’ Washington political game” and is using her flirting with a potential campaign for Senate to “distract from yet another bad vote for Alaska.”

“It cheers us up and gives us good opportunity to remind Alaskans just how loyal to the Obama agenda you have been,” she concluded.

Palin was responding to quotes Begich provided POLITICO in which he questioned whether the former governor was even an Alaska resident anymore. ““She’s been away from Alaska a lot and has probably lost touch with what’s going on. She should go to my webpage,” he said. “Most Alaskans I see on a pretty regular basis, but I haven’t seen her for a long time.”

Begich also noted that Palin’s popularity in Alaska has withered so much that she “may not survive” a Republican primary race.