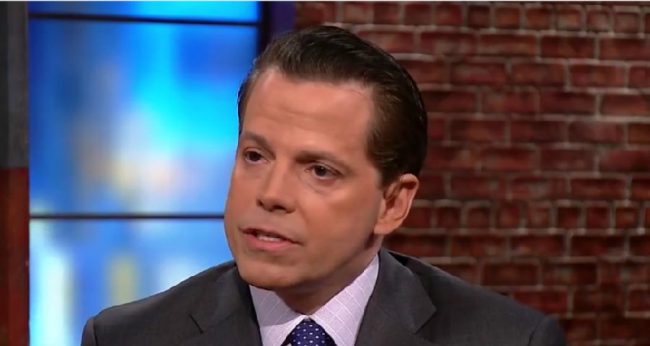 As you may recall, Lizza recorded Scaramucci’s vulgar rant last month in which he called ex-White House Chief of Staff Reince Priebus a “fucking paranoid schizophrenic” and suggested White House chief strategist Steve Bannon could perform auto-fellatio.
While Scaramucci and Lizza both acknowledged that those comments were on the record, it appears the Mooch sees it differently now:

.@RyanLizza is the Linda Tripp of 2017. People know. And he is up at night not being able to live with himself.

As folks began speculating about the meaning of Scaramucci’s odd Tweet, he sent out another clearing it up. In the second Tweet, he indicated that he was unaware that Lizza was recording the phone call.

Yes. He absolutely taped the call without my permission. #lowlife https://t.co/fTDcBw4vcT

Perhaps we’ll get some more answers when Scaramucci appears on The Late Show next week, as host Stephen Colbert announced today that the Mooch will be his guest on Aug. 14. And it certainly appears that Scaramucci wants you to think that, as he retweeted Colbert’s announcement of the booking:

On Monday 8/14 Anthony Scaramucci will be my guest on @colbertlateshow. This is just a heads up for our censors to get ready! #themooch