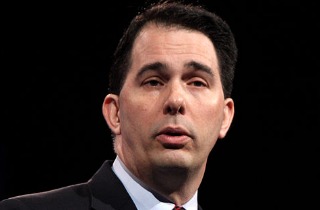 Thanks to a enlivening performance at the Iowa Freedom Summit two months ago, Wisconsin Governor Scott Walker rocketed to the upper echelon of the 2016 GOP field, quickly establishing himself — at least according to the quick-clocking political punditry — as one of the most formidable contenders for the GOP nomination.

But thanks to a series of rollouts by his possible rivals, that advantage has dissipated. A new poll from CNN found Senator Marco Rubio (R-FL) and Senator Rand Paul (R-KY) have risen while Walker has fallen in with the rest of the pack.

To be clear, the early and fluid race has been consistently close and Walker has never registered a double-digit lead over his opponents. Nonetheless, six weeks ago he’d edged out Jeb Bush for first, nabbing 18% in a CNN poll to the latter’s 16%, with the rest of the field trailed. Today’s CNN poll, however, finds Bush maintaining his support while Walker is statistically tied with Rubio and Paul at 12% and 11%, respectively. The deflated numbers suggest at least some of Walker’s early appeal was a lack of contenders.

Meanwhile today’s poll was Rubio’s best showing yet, reflecting a boost from his announcement last week; Senator Ted Cruz (R-TX), the first to announce, remains out of the top five, his support marooned in the far right of the party.

However, nobody in the GOP should be celebrating the following:

Marco Rubio fares best against the former first lady, trailing Clinton by 14 points, 55% to 41%. Bush trails Clinton by 17 points, 56% to 39%. Christie and Paul fall 19 points behind Clinton, each putting up 39% to Clinton’s 58%. Huckabee, Walker, Carson and Cruz each trail Clinton by more than 20 points.

All normal polling caveats apply: nobody votes for almost a year, national polls are not indicative of the results of a state-based electoral system, etc.