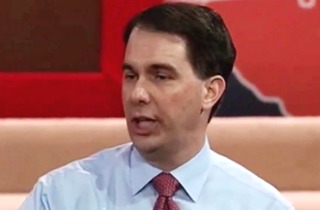 Wisconsin Governor Scott Walker spoke at CPAC today, and during the Q&A session right after his speech, Walker was asked about how he would combat the threat from ISIS. Walker talked at some length about terrorism before remarking, “If I can take on 100,000 protesters, I can do the same across the world.”

Now, some people took offense at what they believed to be Walker likening terrorists to union protesters. The DNC put out a statement saying, “If Scott Walker thinks that it’s appropriate to compare working people speaking up for their rights to brutal terrorists, then he is even less qualified to be president than I thought. Maybe he should go back to punting.”

Beyond that, though, National Review contributing editor Jim Geraghty wrote that Walker’s answer was an “awful” one, not only because of the implied comparison between union protesters and ISIS, but because “taking on a bunch of protesters is not comparably difficult to taking on a Caliphate with sympathizers and terrorists around the globe.”

A Walker spokeswoman sent this statement later to National Review and other media outlets:

Governor Walker believes our fight against ISIS is one of the most important issues our country faces. He was in no way comparing any American citizen to ISIS. What the governor was saying was when faced with adversity he chooses strength and leadership. Those are the qualities we need to fix the leadership void this White House has created.

And in subsequent remarks to CNN, Walker clarified his meaning:

Gov. Walker:"I'm just pointing out the closest thing I have to handling a difficult situation,was the 100,000 protesters I had to deal with"

Gov. Walker told us he doesn't regret saying it, but "there's no analogy between the two other than difficult situation"

Gov. Walker says he was just pointing out handling difficult situations. "There's no comparison between the two. Let me be perfectly clear"

You can watch Walker’s full speech here (the relevant remarks in question come in around the 14-minute mark), via C-SPAN 3: