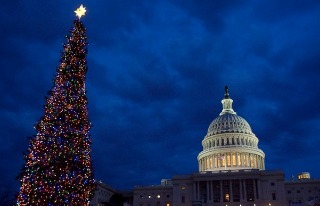 President Obama is cutting his Christmas vacation short to head back to Washington tonight and now, Rep. Emanuel Cleaver (D-MO) is speaking out about the possibility of members of Congress shortening their own holidays: “A high level of Scrooge-tivity instead of Nativity is the order of the day here in Washington.”

It’s unusual for Congress to work the week between Christmas and New Years’, but with the fiscal cliff looming on December 31st, it may be necessary for lawmakers to head back to Capitol Hill early to broker a deal. Rep. Cleaver aptly described the situation to The Atlantic‘s Elahe Izadi, saying, “I think we can leave off the first part of it and say on Capitol Hill we’re not having Christmas, we’re just having a mess.”

“It may in fact be Christmas everywhere around the world except Capitol Hill,” he opined. According to Cleaver, the tragic shooting in Connecticut earlier this month has left many politicians, like parents across the country, wishing they could spend more time with their families this holiday season.

Not all congresspeople feel as strongly about it as Rep. Cleaver, however. Rep. Richard Nugent (R-FL) said that although it might mean his family goes on a holiday cruise without him, he “doesn’t get grumpy” about the unpredictable schedule of his work. “This is what I signed up to do,” he said.

Rep. Henry Waxman (D-CA) says he wouldn’t “mind” coming back, but only “if it’ll actually solve our problems before we leave at the end of the year.” He’s not too optimistic, either: “Right now it looks like we’re going to come back and still fail to avoid the fiscal cliff.”