Sean Hannity Tweetstorm Calls Out Fox News’ Steve Hilton and Brit Hume for Fighting on Twitter: ‘What Happened to No P}^*++= in the Tent’ 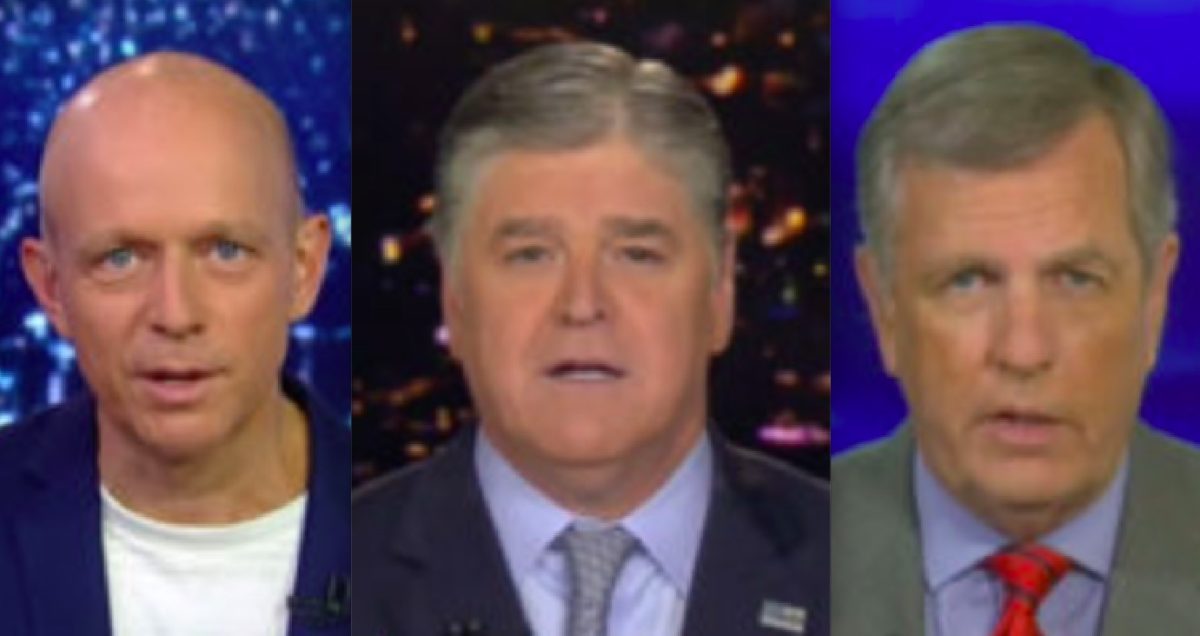 Hannity was upset about an online back-and-forth between the past that revolved around 2020 Democratic candidate and former Vice President Joe Biden. Hume initiated the clash when he quote-tweeted a Hilton post claiming that Biden was “totally corrupt,” by pointing out the Politico report being linked to said no such thing. Hilton fired back at Hume, saying: “You’ve been in the Swamp too long if you think he is not corrupt!!!”

The two traded barbs a few more times before Hilton executed a tactful retreat after a dressing down by Hume.

Hannity, tagging both men, linked to the Mediaite story about the dispute as the start of a Twitter thread that tried to, alternately, chastise the two, broker peace, and support Hilton’s claims against Biden.

“Most people would advise me to stay out of this, but I’m me. Here goes,” Hannity wrote.

@brithume @SteveHiltonx “Most people would advise me to stay out of this, but I’m me. Here goes.”

Steve, first to you. Brit Hume is one of maybe 3 true fair, balanced and objective journalists in the country….

@brithume @SteveHiltonx He’s earned my respect, and you need to study his amazing career and frankly I would apologize. Brit is not the swamp. A rare exception and one day I promise I will name names. Highly recognizable names…

@brithume @SteveHiltonx Frankly journalism could use you now more than ever, but I know you have earned at least the partial retirement I hope you are enjoying…

@brithume @SteveHiltonx I would say it differently than Steve, but there are serious issues that need to be investigated regarding Biden and his son. I would first point you in the direction of Peter Schweizer’s most recent book, as it relates to China…

@brithume @SteveHiltonx And John Solomon’s reporting on Ukraine and Biden. Monday I will email you all that my staff has compiled. Best to both of you…

Hannity wrapped up his thread by expressing his “deep respect” for Hume — whom he still clearly disagrees with about Biden — and offering a sarcastic greeting to this website: “@Mediaite enjoy.”

@brithume @SteveHiltonx What happened to “No P}^*++= in the tent”. Well we know that’s BS, those days are long gone. One day I’ll engage it in force. @Mediaite enjoy. Best Sean

@brithume @SteveHiltonx Brit, I have nothing but a deep respect for you, and you went out of your way to be nice and supportive and understanding of what talk show hosts do when many others were less than kind…