Sean Spicer: CNN’s Jim Acosta at Trump Presser Was ‘Disrespectful’ and Should Apologize 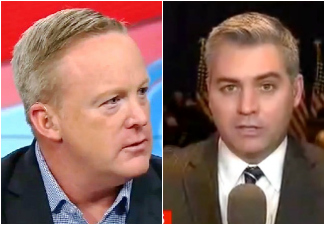 CNN’s Jim Acosta attempted to ask President-elect Donald Trump a question at his presser today, invoking Trump’s criticisms of his network, and the two ended up getting into a fierce back-and-forth that culminated in Trump calling CNN “fake news.”

Afterwards, Acosta said that incoming White House Press Secretary Sean Spicer “did say to me that if I were to do that again, I was going to be thrown out of this press conference.”

Spicer criticized Acosta during an appearance on Fox Business Network tonight, and followed that up with this tweet saying Acosta should apologize:

Regardless of party, @acosta behavior was rude, inappropriate and disrespectful. He owes @realDonaldTrump and his colleagues an apology https://t.co/LnTkYam8IJ

Acosta pushed back on Twitter, and his colleague Jake Tapper chimed in too:

An unfortunate statement. Sean you know that you threatened to throw me out of that news conference if I asked another question. #realnews https://t.co/T4dYXZbomd

I have covered 4 presidential campaigns. Democrats and Republicans. This has never happened. Let's deescalate, find a way to work together. https://t.co/wgNsXlwt4z

"Rude, inappropriate and disrespectful." Who does that sound like? https://t.co/uPGB7gb5FS

I know it's tough for you to be objective Glenn when it comes to conservatives, but even you should be able to agree govs it was out of line https://t.co/uZyAG1U0hJ