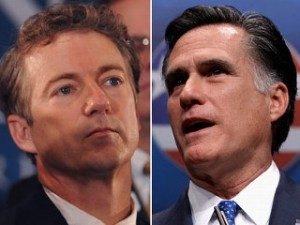 Kentucky Senator Rand Paul officially gave his support to Mitt Romney in the presidential election on Thursday, and already he is getting hit by libertarians, a group he and his father Ron Paul are particularly strong with, for supporting a candidate who has a decidedly non-libertarian philosophy. Paul praised Romney for his positions on SOPA and the Federal Reserve, among other things, but the Libertarian Party issued an official press release yesterday calling Paul’s endorsement a betrayal of libertarian principles and of his own father’s politics.

The Libertarians point out right off the bat that when Paul ran for Senate in 2010, he did a lot of reaching out to his father’s supporters and has made a name for himself as someone who values personal liberty. So the Romney endorsement came as quite a shock to them.

[N]o true libertarian, no true friend of liberty, and no true blue Tea Partier could possibly even consider, much less actually endorse or approve of, the Father of Obamacare, Big Government tax and spender, Republican Mitt Romney.

Especially the son of Ron Paul, who has no excuse.

Especially a medical doctor, who has even fewer excuses.

The press release does make note of the few reasons Paul gave for supporting Romney, but it emphasizes that there were many qualifying factors about Romney that Paul did not say, like that he would “cut federal spending” or “never raise taxes.” It concludes that Romney is “unfit” to be president and urges Ron Paul supporters to support the Libertarian Party over the Republicans because of the candidate they ended up with.

Both Newt Gingrich and Rick Santorum have said that Ron Paul’s supporters will unquestionably shake things up at the Republican National Convention in Tampa over the direction of the GOP and several key issues on its official platform.