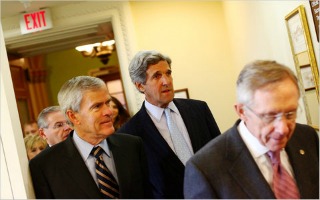 With oral arguments in the Supreme Court over the constitutionality of the Patient Protection and Affordable Care Act of 2010 complete, media spin from Senate Democrats is all over the map on the likelihood of part or all of the law being thrown out and just how such an eventuality would impact Democratic electoral prospects in November.

At a press conference convened by Senate Democrats to assuage increasingly panicked liberal supporters of health care reform’s legitimacy, several prominent legislators talked down the possibility that the high court would overturn a monumental law like the ACA.

Freshman Sen. Richard Blumenthal (D-CT) warned the court that striking down the individual mandate, which appears increasingly likely, would have “grave consequences” for the nation and the credibility of the Judicial Branch.

“This court would not only have to stretch, it would have to abandon and completely overrule a lot of modern precedent, which would do grave damage to this court, in its credibility and power,” said Sen. Blumenthal. “The court commands no armies, it has no money; it depends for its power on its credibility. The only reason people obey it is because it has that credibility.”

Sen. John Kerry (D-MA) reminded supporters that the justices pointed questions on the constitutionality of the ACA are not indicative of their thinking on the matter one way or the other. “They’re [the Supreme Court Justices] working through this process as they ought to, mindful of the fact that 30 courts below them have already made a judgment upholding it,” said Sen. Kerry.

While Democrats appear confident that health care reform will be upheld, they sound equally confident that if the sweeping reform law is repealed that it would be a boon for their party at the polls.

Among those giving voice to this theory is Senate Majority Leader Harry Reid (D-NV) “There’s a significant school of thought that the administration is – puts them in a better position for the election if it’s turned down,” Sen. Reid told reporters on Wednesday. “Now, I think it will be upheld but I don’t know but you can read all that stuff as well as I can.”

“I think that this will be the best thing that ever happened to the Democratic party because health care costs are going to escalate unbelievably,” said Carville. “Just as a professional Democrat, there’s nothing better to me than overturning this thing 5-4 and then the Republican party will own the health care system for the foreseeable future. And I really believe that. That is not spin.”

There seems to be something of a disconnect in the political spin on the heels of two frustrating days for supporters of health care reform. Democrats have rhetorically painted themselves into a corner, noting that health care reform’s repeal would be bad for the nation but good for their party politically. That is precisely the same charge Democratic partisans routinely make against Republicans.

It’s hard to believe that if SCOTUS declares the individual mandate, or the whole law, unconstitutional that it would benefit Democrats in November. The incongruity of the political spin reflects the genuine shock among inside-the-Beltway Democrats over the hostility of the Supreme Court to the health care law’s mandates and the lack of a limiting principle.