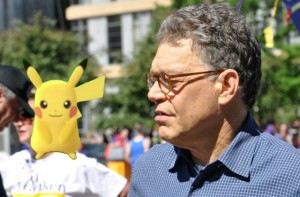 Senator Al Franken is fully aware that y’all are going out and collecting some Pokémon, but he has a few concerns about exactly how much information is being collected on the game’s millions of users.

In a letter obtained by Mother Jones, Franken reaches out to game developer Niantic with his concerns about user privacy.

There have been recent reports that people with iPhones who signed into Pokémon Go in their Google accounts basically gives the game complete access to your Google account (though that’s reportedly being fixed). But everyone is eagerly getting in on the fun, including at least two of Franken’s congressional colleagues.

Franken says to CEO John Hanke, “I am concerned about the extent to which Niantic may be unnecessarily collecting, using, and sharing a wide range of users’ personal information without their appropriate consent… I ask that you provide greater clarity on how Niantic is addressing issues of user privacy and
security, particularly that of its younger players.”

The Minnesota senator gives him a list of questions to answer, including the following:

Pokemon GO has stated that it collects a broad array of users’ personal information, including but not limited to a user’s profile and account information, their precise location data, and information obtained through Cookies and Web Beacons. Can you explain exactly which information collected by Pokemon GO is necessary for the provision or improvement of services? Are there any other purposes for which Pokemon GO collects all of this information?

Can you describe how Niantic ensures parents provide meaningful consent for their child’s use ofPokemon GO and thus the collection of their child’s personal information? Apart from publicly available privacy policies, how does Niantic inform parents about how their child’s information is collected and used?