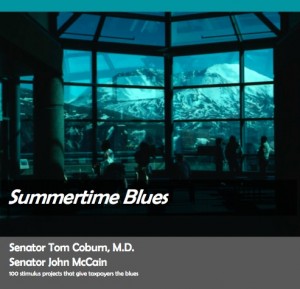 Revelations that some of the stimulus money shelled out under President Obama‘s Recovery Act has been squandered on less-than-deserving projects are nothing new. But now, thanks to GOP Sens. Tom Coburn and John McCain, a large portion of these allegedly unworthy ventures have been exposed and criticized in a handy-dandy list.

The report, called Summertime Blues, was released today on Coburn’s website. It outlines 100 projects that have received funding from the stimulus bill, but according to Coburn and McCain, have either not created new jobs, taken away job opportunities, or are just plain stupid. Some of them (like their number one example of a $554,763 window repair job for a vacant building) are rightfully irritating. But others, listed below according to their rank in the report, are almost too absurd to be mad about:

28) $144,541 for Wake Forest University scientists to give monkeys cocaine and see what happens. Even scarier: they’re having the monkeys administer the coke themselves. No word yet if part of the cost is allocated to rolled up hundred dollar bills.

36) $712,883 to build a machine that tells jokes (presumably funnier than the ones Coburn and McCain tried to crack in this report).

Sen. McCain has been using his Twitter to slowly release throughout the day his own list of the top ten “wasteful projects from the stimulus” with examples taken from the report. If he knows what’s good for him, and has ever seen the movie Outbreak, he’ll put those crack monkeys in the top five.