Rush Limbaugh: There Is ‘No Proof’ Tomorrow Is President Obama’s Birthday 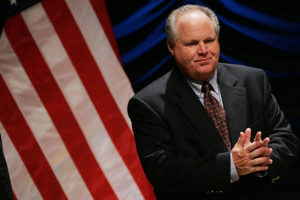 Happy Birthday, President Obama! Tomorrow, our 44th president turns 49, and Rush Limbaugh would really love to wish him many happy returns, sincerely. Actually, that’s not true: This morning, Limbaugh refused to send good wishes to the President, because he doesn’t believe tomorrow is his birthday, since “we haven’t seen any proof of that.”

Limbaugh’s relationship with the birther movement is quite sophisticated– he’s never quite outright called himself a birther or legitimized their claims, but once in a while will make an indirect, tongue-in-cheek reference to an irrelevant topic that ties it together with the birther conspiracy (ie, “Obama would get deported in Arizona“). This works for him because it is entertaining, not bold enough to get him in hot water with the Republican Party, and just bold enough to make the birthers think he’s “in on it.” No one who would call Limbaugh out on flirting with the birthers would not have already condemned him for some other comment he has made on his show, which minimizes the possible damage. It’s a dance that many, most recently Louisiana Senator David Vitter, try to engage in with little success, but Limbaugh manages to balance rather skillfully.

Today’s birther nod was embedded in what began like a birthday message but ended as a condemnation of Democratic fundraisers’ exploitative tactics, taking a detour through Birther Square along the way: