Take a look at this headline and subheadline from a Politico article Monday, and tell me how it makes one lick of sense: 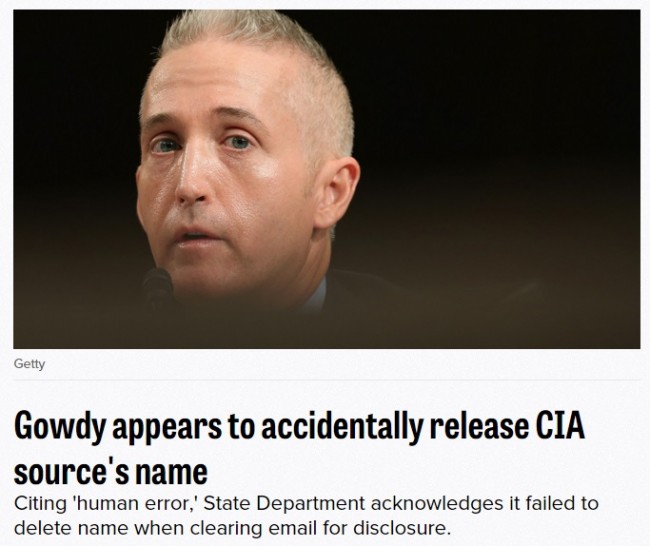 I think anyone would agree that saying someone “accidentally” did something implies some degree of guilt. If you were to show the above headline––just the headline––to 1,000 people and ask them “Who is to blame for the release of the name of a CIA source?”, I expect 1,000 people would respond, “Trey Gowdy.” Even though, as the story makes perfectly clear, someone else has already taken the blame.

How on earth is that fair? Politico’s decision to focus blame on Gowdy only makes sense if you assume that his decision to release the emails in the first place was wrong. But that’s a political judgment, not the sort of judgment reporters ought to making. And again, if Gowdy’s decision was reckless, it was only reckless because he put his faith in the State Department and they dropped the ball.

Reporters file FOIA requests all the time to obtain emails from government officials, which are redacted to exclude personal information, classified information, etc. If the State Department accidentally failed to redact classified information and a Politico reporter posted the full email, would Politico’s headline read that they “accidentally” released that information? Or would they justifiably blame the people whose only job is to prevent these kinds of messes?

The kicker to this whole debacle is that as Politico’s story admits, the CIA source that was accidentally outed has been “publicly acknowledged for years.” While the State Department wanted to keep the name classified for privacy reasons, the CIA “did not consider the information classified.” So the national security implications for the entire story are basically nonexistent.

So in the end, Politico attacked Trey Gowdy for not-actually-releasing the name of an openly-acknowledged CIA source. No doubt the fact that this attack comes days before Gowdy is set to question Democratic frontrunner Hillary Clinton is a complete coincidence.