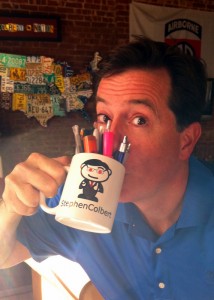 The Stephen Colbert/Reddit mutual love affair continues today in the form of a series of candid (and out of character) responses the TV host gave to questions from the Internet community. When Redditors first started giving money to the charity DonorsChoose to spur Colbert into having a rally, Colbert responded by promising he’d give them an exclusive interview using questions from users if they reached a certain amount ($500,000). Well, the users more than met his number and so, today, Reddit admins posted his answers, charming and thoughtful responses to questions about his appearance at the 2006 White House Correspondents’ Association Dinner, Jon Stewart’s interview with Rachel Maddow, and his own interview process.

Here are a few of the highlights from Reddit:

“#1 by Killfile
To this day I’m convinced that your appearance at the White House Correspondents’ Dinner was because the Bush Administration didn’t understand your show.
Did they? What happened behind the scenes there? Was it more ‘non-alcoholic beer in the Roosevelt Room’ or ‘Dick Cheney peppering your limo with bird-shot as you beat a hasty retreat?’
I was as surprised as the next guy that I was invited to roast the President and the press corps that spring.
Here’s how it works. The White House Press Association (or some name close to that) actually does the inviting, not the President or White House. The president of the press association that year was a man named, I believe, Mark Smith, I think from the AP. He invited me. When all was said and done, I wrote to thank him and said I hoped I hadn’t made trouble for him. He said there was zero fallout.
As for the backstage aspects of the night, the President has a nice, small gathering in a room near the banquet hall. The presidential seal is etched into the granite on the floor. A few news anchors, football greats, cabinet members and advisors (I remember Rove and Chertoff, there were others I think), Rich Dahm, Allison Silverman, my brothers and sisters and mom, my wife Evie, and the President and Mrs. Bush. Let me say that the President could not have been nicer, especially to my mother. I have some lovely pictures of her with him. The President and I had a brief conversation before we went on stage. There were in total maybe 60 people at the party, many of whom I should remember more about, but I was pretty focused on my job that night. There was no backstage event after the dinner, but several parties around town.
I had my family up to our room for a drink then hit a party, don’t remember which one. We all had a great time. but I had no sense of public reaction until Monday at work.
…
#6 by noncompliantcitizen
Do you sometimes wish you could not be in character for some interviews? Being in character, do you feel that it prevents some people from coming on the show?
Well these questions are really related. I’ll say that from my end of the interview, I often have a guest whose subject I happen to know a thing or two about, and I want to engage them intelligently, but I am an aggressively ignorant character. That is frustrating. Of course knowing their subject lets me make the dumbest possible characterizations of their position or idea. If you ever see me truly being vigorously dense with a guest, I probably know something of his or her subject. And as I said, yes, the character aspect may give some people pause.”

Another interesting aspect about the interviews is that Colbert explains that he never talks to anyone on the show without first explaining clearly that he will be doing a character unlike, say, Sacha Baron Cohen. We wonder if this has anything to do with his distaste for doing field reports in the early, Craig Kilborn days of The Daily Show, when those segments were more about tricking and then mocking ignorant or deluded people who thought it was a real news show. In an interview back in 2003, Colbert described how going on those shoots made him want to “take [his] soul off, put it on a wire hanger, and leave it in the closet before [he] got on the plane.”

Check out the rest of the responses to questions about his struggles before becoming successful and his stance on marijuana legalization (this is Reddit, of course) here.