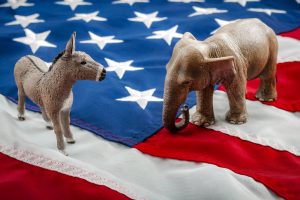 In a study published in the Journal of Public Economics, it was found that the general attractiveness of a political candidate correlates to their ideology, and that those on the right in Europe, Australia and the US were overall seen as better looking than their counterparts on the left.

The research also noted that this was a correlation and not causation. Essentially, attractive people tend to drift towards more conservative political positions because life tends to be easier for them, considering they tend to make more money, and are thus going to be generally more resistant to the type of social welfare and redistribution programs championed by liberals.

Another explanation the study proposed for attractive people leaning right is that they are usually treated better than everyone else and therefore don’t see the need to make the world more equal for others, finding things to largely be fair.

The study was conducted by researchers showing those surveyed to respond to photos of candidates and lawmakers in Europe, America and Australia and to rate them on a five-point scale on attractiveness. The results showed that those on the right fared better on the beauty scale than liberals. It was also shown that in the United States, Republican voters care more about appearance than Democrats, specifically when it comes to candidates they no little about ideologically.

It was also found that when asked if a candidate was conservative or liberal, respondents used their attractiveness to figure it out, tending to answer conservative the more attractive the candidate.