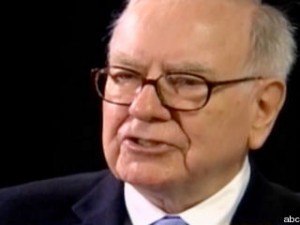 Warren Buffett cannot be simply described with one qualifier; he is, among other things, an American investor, an industrialist and a philanthropist. But he’s probably most commonly known as one of the wealthiest men in America, making his billions with a smart and safe investing strategy that earned him the nickname “the Oracle of Omaha.” So when the poster-boy for a free market system pens a thoughtful op-ed for the NY Times arguing for taxing of the super wealthy, pundits, politicians and the “people” should most certainly take note.

Buffett’s politics have become a bit of an enigma for the free-market set; he has been a supporter of President Barack Obama going back to the beginnings of his 2007 campaign, which flies in the face of the anti-regulation flat-taxers who have long held Buffett (and his ilk) as examples of their policy. This notion has “trickled down” to the many lower and middle class voters who also oppose any tax increase, perhaps because they don’t see lower tax rates for their particular tax bracket, but because they perhaps consider themselves to be unrealized or unlucky millionaires. Either way, Buffet’s words matter.

So with a public debate looming over ways in which the U.S. can control federal debt –especially reconsidering current federal revenue and ending the Bush Tax Cuts — Buffett’s Monday morning op-ed in which he asks that he “stop being coddled” by the current U.S. tax code, is at worst an effective way to drive the weekly news narrative. Particularly in the very populist manner in which he opens the piece:

OUR leaders have asked for “shared sacrifice.” But when they did the asking, they spared me. I checked with my mega-rich friends to learn what pain they were expecting. They, too, were left untouched.

While the poor and middle class fight for us in Afghanistan, and while most Americans struggle to make ends meet, we mega-rich continue to get our extraordinary tax breaks. Some of us are investment managers who earn billions from our daily labors but are allowed to classify our income as “carried interest,” thereby getting a bargain 15 percent tax rate. Others own stock index futures for 10 minutes and have 60 percent of their gain taxed at 15 percent, as if they’d been long-term investors.

These and other blessings are showered upon us by legislators in Washington who feel compelled to protect us, much as if we were spotted owls or some other endangered species. It’s nice to have friends in high places.

To fully appreciate Buffett’s thesis, one should read the entire piece (here), but either way, now that the super rich are talking about increasing taxes on the super rich, perhaps it is time to take note?