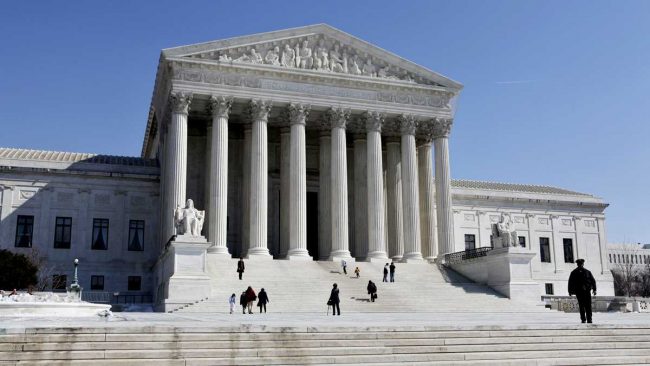 On Monday, in a unanimous decision, the United States Supreme Court struck a blow to college campus fascists, social justice warriors and the perpetually offended everywhere when it ruled that a federal law banning the trademark of offensive names is unconstitutional, according to Fox News.

Hate speech is not protected by the first amendment. https://t.co/DOct3xcLoY

The case was brought to the court after an Asian-American band named “The Slants” wanted to copyright their group name but were not allowed due to a 70-year old “disparagement clause” which the Court has now overruled.

“(The idea that the government may restrict) speech expressing ideas that offend … strikes at the heart of the First Amendment,” wrote Justice Alito in his opinion. “Speech that demeans on the basis of race, ethnicity, gender, religion, age, disability, or any other similar ground is hateful; but the proudest boast of our free speech jurisprudence is that we protect the freedom to express ‘the thought that we hate.’”

In a separate opinion, Justice Kennedy supported Alito’s position, stating, “A law found to discriminate based on viewpoint is an ‘egregious form of content discrimination,’ which is ‘presumptively unconstitutional,” adding “A law that can be directed against speech found offensive to some portion of the public can be turned against minority and dissenting views to the detriment of all. The First Amendment does not entrust that power to the government’s benevolence. Instead, our reliance must be on the substantial safeguards of free and open discussion in a democratic society.”

Alito also concluded, “The commercial market is well stocked with merchandise that disparages prominent figures and groups, and the line between commercial and non-commercial speech is not always clear, as this case illustrates. If affixing the commercial label permits the suppression of any speech that may lead to political or social ‘volatility,’ free speech would be endangered,” he wrote.

The court’s ruling could have a profound impact on one of the more well-known and highly debated “offensive” trademarked names, the Washington Redskins. The trademark office canceled the football team’s lucrative trademarks in 2014 after deciding that the word “Redskins” was disparaging to Native Americans.

ACLU attorney Lee Rowland called the decision a “major victory for the First Amendment” and the Slants expressed their satisfaction with the decision via Twitter saying they were “humbled and thrilled” following the eight year legal battle.

After an excruciating legal battle that has spanned nearly eight years, we’re beyond humbled and thrilled to have… https://t.co/O5ZNUfAy7Q