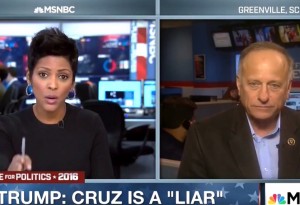 The sudden death of Supreme Court Justice Antonin Scalia this weekend led to an instant political fight, as Republicans suddenly insisted that President Obama ought to be not just the first black president in our nation’s history, but the first president not to nominate a replacement for an open seat on our nation’s highest court just because.

That fight has already led to the predictable digging for inconsistent quotes (some more relevant than others), and even inconsistencies within the same quote, as when Ted Cruz praised originalist Antonin Scalia seconds before saying that the Senate should ignore the constitution because, well, because Obama was reelected three years ago.

Cries of “hypocrisy” aside, though, MSNBC anchor Tamron Hall ended the argument for good and all Monday afternoon when she gave Rep. Steve King a crash course in Article II of the U.S. Constitution. When Hall confronted King with Sen. Chuck Grassley’s 2008 complaints about slow confirmations by Democrats, versus his current position in favor of blocking any nominee that President Obama appoints, King tried to spread the blame and inconsistency to both sides, but Hall brought things back around to what really matters:

King: You’ll find Chuck Schumer in his own words, and others also that contradict themselves, and you’re going to see, if people have been in that senate long enough, that they have been on the opposite side of this equation, there will be arguments that are made on both sides of this. But if I heard Chuck Grassley’s words right, he said judicial nominees, he didn’t say Supreme Court justices.

Hall: And others would say please see the words correctly in the constitution, it clearly states the role of the President, and that of the Senate.

Hall is absolutely right, it doesn’t really matter what sort of flippity-floppity gotcha you think you’ve caught some senator in, what matters is what the U.S. Constitution says. Let’s find the part where it sets forth differences between Supreme Court and other judicial nominees, ro cautions the president not to nominate justices if the president is in the final year of his term:

That means that whether you think you’re going to like and/or confirm a president’s nominee or not, if you are a United States senator, it is your job to consider such a nomination, and vote on it. It really is as simple as that, and what Republicans are doing, attempting to shorten Obama’s term by a year, might be fun to talk about, but it is without basis in the constitution that Antonin Scalia cared so much about.