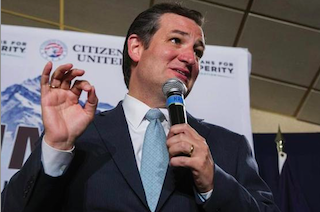 In this week’s issue of The New Yorker, Jeffrey Toobin takes on the career and political impact of Senator Ted Cruz (R-TX). The piece is full fascinating tidbits about the junior senator, including his theory about the Republican Party’s general misconceptions about who it should be nominating for president.

Setting himself up as the ideal candidate for 2016, Cruz argues at the top of Toobin’s article that the GOP has only succeeded over the past four decades when it has nominated a true “conservative” and lost every time it has tried to elect a “moderate.”

As for George H.W. Bush, Cruz said he “ran as a strong conservative, ran to continue the third term of Ronald Reagan, continue the Ronald Reagan revolution. Then he raised taxes and in ’92 ran as an establishment moderate — same candidate, two very different campaigns. First one won, second one lost.”

“And what does the entire D.C. Republican consulting class say?” Cruz asked. “‘In 2016, we need another establishment moderate!’ Hasn’t worked in four decades. ‘But next time will be the time!’ ”

Toobin labels Cruz’s historical reading “both self-serving and questionable on its own terms.” He writes:

Conveniently, he begins his story after the debacle of Barry Goldwater, a conservative purist whom Cruz somewhat resembles. Nixon ran as a healer and governed, by contemporary standards, as a moderate, opening up relations with China, signing into law measures banning sex discrimination, expanding the use of affirmative action, establishing the Environmental Protection Agency, and signing the Clean Air Act. Reagan’s record as governor of California included support for tax increases, gun control, and abortion rights, so he sometimes appeared less conservative than his modern reputation suggests. George W. Bush won (if he won) as a self-advertised “compassionate conservative.”

The author also quotes one unnamed Democratic senator who welcomes a Cruz campaign (“We all hope he runs.”), describing him as the Republicans’ Walter Mondale, who lost every state but one to Reagan in 1984. The implication is that Cruz could face a similar fate in an election against Hillary Clinton.