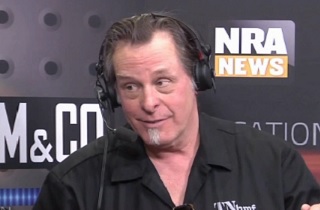 In a more-than-technical sense, Ted Nugent really hasn’t apologized for calling President Obama a “subhuman mongrel,” but the rock dinosaur and Call of Doody champion hasn’t even feinted at an apology for slurs he’s made against at least two prominent Jewish public figures.

In January, days before his comments about the President, Nugent called movie mogul Harvey Weinstein a “subhuman punk,” and compared him to Nazi propaganda minister Joseph Goebbels — the same comparison he deployed on Wolf Blitzer this week.

For the better part of this week, CNN’s Wolf Blitzer has been hammering Nugent — and any Republican he and CNN can get their hands on — over Texas Attorney General and gubernatorial candidate Greg Abbott‘s decision to campaign with Nugent after he used what Blitzer demonstrated, in excruciating detail, was Nazi terminology. A defiant Nugent at first fired misspelled Nazi epithets at CNN, but under tremendous pressure from Republicans who couldn’t quite bring themselves to denounce Nugent (with one exception), he offered what some are calling an apology.

In most apologies, however, the party who was attacked is the one being apologized to; whereas Nugent specifically said he was not apologizing to President Obama. You can listen to the apology for yourself, but it sounds very much like he’s apologizing for the blowback his remark caused. Asked later in the interview, “Are you apologizing to the President for calling him a subhuman mongrel,” Nugent finally offered a “Yes.”

That still leaves a whole raft of separate ugliness toward the President, but even on the “‘untermenschen” score, Nugent isn’t in the clear. Just days before his remarks about President Obama, Nugent appeared on NRA TV to take shots at movie mogul Weinstein’s plan to make an anti-gun film, and the Nazi lingo filled the air like Nugent’s pantload in the waiting room of a draft office:

Nugent hasn’t apologized for those slurs, or for those he directed at Blitzer and CNN, insincerely or not. Blitzer may be reticent to make himself the story by demanding an apology for himself, but surely, that attack on Harvey Weinstein is as toxic as the one against the President. Hopefully, he will continue to shine a light on the long history of sick statements by Nugent, and the Republicans who can’t quit him.

My friend Matt Lewis is out with a column today pegging Nugent’s grip on Republicans to a desperation for celebrity attention, and to the fact that liberals hate him. Both of these things are marginally true (although Nugent is endlessly useful to liberals), but that doesn’t explain why people like Ted Cruz, Abbott, Rick Perry, and pretty much every other Republican continue to embrace this literal and figurative shit factory. There are a significant number of conservatives who don’t hold their noses for this kind of thing, they relish it, they believe the President is a subhuman mongrel, and all that that implies.

If some Republican denounces Nugent, those hateful votes are up for grabs, and there is no corresponding gain. Rand Paul didn’t pick up any conservative votes demanding an apology. Conversely, cutting Nugent slack doesn’t hurt Republicans with decent conservatives like Lewis, because they’ve got ready-made excuses like the President’s “Hollywood friends” and their “lamestream media” persecution complex. Matt has good advice for Republicans, but is he ditching Abbott over this?

The only thing that kept this from being another circle-the-wagons last stand for Nugent was Blitzer and his eloquent, authoritative attachment of the rocker’s rhetoric to the Nazis, because while it is SOP for conservatives to dismiss black people as overly-sensitive race hustlers, no one ever says that about the Holocaust. That would cost them.