Thank You, NMA, For That Animated Cartoon Of Osama Bin Laden Being Blown Up And Raped By Pigs 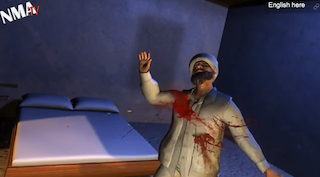 An interesting debate has sprung up following last night’s big news; Is it morally right to celebrate the death of Osama bin Laden? Sure, if there’s anyone who’s death should make us happy, it’s him. However, should we really be celebrating the fact that another human being has been shot to death? It’s truly any intriguing question that has many philosophical implications. However, if you want to discuss it, this isn’t the place. This is a post containing a cartoon of Bin Laden repeatedly being shot while animated blood sprays everyone produced by those Sultans of Subtlety, Next Media Animation.

Yes, NMA wasted no time pumping out a little CGI masterpiece for everyone who needs a some visual stimulus to go with their Bin Laden death reports. Taiwanese news organization hasn’t been getting as much attention recently since the novelty of their absurdist animated takes began to wear off. However, if there’s one situation that they were perfect for, it’s this. And they responded with clear gusto, serving up a version of the terrorist’s demise that could almost be mistaken for a clip from the new Mortal Kombat game. Yeah…I might as well throw up a NSFW warning at this point.

Side note: NMA got this up so quickly that I’m reminded of something I thought of last night. As fun as this is, we want the true masters of speedy, cartoon satire to take a whack at old Bin Laden. To quote my own Twitter, Matt Stone and Trey Parker, the clock is ticking. The nation needs an “Osama is dead” South Park episode this Wednesday. Come on. The Comedy Awards parody can wait. I saw The Book of Mormon, I believe you can do anything.