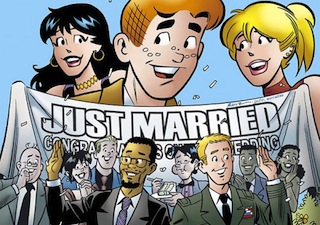 Hey, remember that whacky group of funsters, One Million Moms? You remember. They’re the folks who protest homosexuality in the media and have at least one huge problem with their name (I’ll give you a hint; it’s not the “mom” part). Anyway, coming off a protest of JCPenney and Ellen DeGeneres that was so successful that even Bill O’Reilly mocked them, the group has chosen a new evil to combat; Archie comics.

RELATED: Ellen DeGeneres Thanks Bill O’Reilly For Defending Her

You see, in case you don’t follow the adventures of Jughead and the gang, the town of Riverdale has a gay person in it. Obviously, this is worse than war, famine, and cancer combined, so the assorted mothers of One Million Moms have begun a new petition (it worked so well last time, guys!) to get Toys R Us to take Archie off the shelves:

“Select Toys ‘R’ Us stores are now selling ‘Archie’ comic books with a same-sex wedding displayed on the front cover. The front cover reads “Just Married” with two men marrying and one is wearing a service uniform. This comic book is being sold in select stores across the country. One example is the Queensbury, NY location in the upstate New York area.

Toys ‘R’ Us employees do not actually set up the displays; they leave this up to the vendor, but they should be aware of the merchandise being sold in their stores nonetheless. These comic books are sold at the front checkout counters so they are highly visible to employees, managers, customers and children. Unfortunately, children are now being exposed to same-sex marriage in a toy store. This is the last place a parent would expect to be confronted with questions from their children on topics that are too complicated for them to understand. Issues of this nature are being introduced too early and too soon, which is becoming extremely common and unnecessary.

A trip to the toy store turns into a premature discussion on sexual orientation and is completely uncalled for. Toys ‘R’ Us should be more responsible in the products they carry.

Please send Toys ‘R’ Us an email letter requesting they remove all the same-sex ‘Just Married – Archie’ comic books immediately from their shelves.”

I know what you’re thinking; this is truly shocking. I had no idea people bought comic books at Toys R Us either.

Anyway, John Goldwater, Co-CEO of Archie Comics, has released a statement in response. Clearly, he and his co-workers are just shaking in their boots:

“We stand by Life with Archie #16. As I’ve said before, Riverdale is a safe, welcoming place that does not judge anyone. It’s an idealized version of America that will hopefully become reality someday. We’re sorry the American Family Association/OneMillionMoms.com feels so negatively about our product, but they have every right to their opinion, just like we have the right to stand by ours. Kevin Keller will forever be a part of Riverdale, and he will live a happy, long life free of prejudice, hate and narrow-minded people.“

I think what’s most hilarious about this (besides everything) is that the gay character, Kevin Keller, has been in the comic since 2010. Last year, he was first shown to be in a same sex marriage thanks to a future storyline. At the time, I predicted that there would be silly outrage. But, you know what happened? Nothing. Nobody cares.

And why would they? Seriously, Ellen and Archie? Does One Million Moms purposefully choose their targets by thinking of the least offensive things imaginable? I mean, this group would probably be able to rile up more anger if they started protesting my friend Tom. Hell, that guy was a poor sport when I beat him in foosball the other night. Clearly, he’s a more offensive gay guy than anything printed in the pages of Archie f**king Comics.

But, hey, maybe there’s a reason for One Million Moms’ bizarre (is “stupid” too strong a word?) choices. As we all know, the group has way less than a million members. Maybe the number in their name actually refers to the amount of free time they have on their hands. After all, anyone’s bound to go a little crazy with after one million hours straight of twiddling their thumbs. Hell, if we all chipped in, sent the group copies of The Lovely Bones, and told them to start a book club, none of this would probably happen.

Whatever the case, One Million Moms should just keep on doing what their doing. They’re like those folks in the 50s who went on TV while missing half their teeth and started complaining about that “gol’ dern integration.” No matter what they say, they’re just helping the other side.