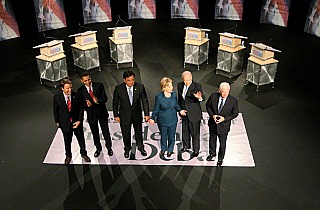 Democrats in Congress are in a bind. The leader of their party, the President of the United States, is using all the political leverage he can muster to compel their support for an unpopular intervention into Syria’s civil war. Some are publicly conceding that President Barack Obama’s effort to marshal support in Congress is “embarrassing” and that they only reluctantly chose to support the president out of “loyalty.” It is a safe bet that the statements expressed in private are far less diplomatic.

Obama is in the process of ushering in a sea change in how America’s two political parties brand themselves. The modern Democratic brand was forged in the grassroots opposition to the Iraq War. President George W. Bush alienated the globe by rushing into a war of choice, the origin myth goes. It was the messianic duty of Obama to lead the country out of the desert and shed its newly acquired global pariah status. The president has never been especially effective at reclaiming America’s imagined status as a beloved and indispensable nation. It was an impossible task because this was never the consensus global opinion, particularly among the international left.

The push for intervention in Syria has highlighted the contradictions in Obama’s foreign policy doctrine. In his effort to enforce international customary law prohibiting the use of chemical weapons, the president has alienated even America’s staunchest allies with an ill-timed and poorly prepared public push for support.

Now, Obama is going about securing domestic backing for intervention, and he is doing it the old fashioned way: coercion. With unreliable and wavering support from Congressional Republicans, Obama is looking to his Democratic allies to back him. Thus far, their support has been tepid, qualified, and transactional.

If Syrian intervention is forthcoming, and it appears to be, the White House will do everything in its power to make certain that it is a quick and painless campaign. But the plan never survives first contact with the enemy, as Clausewitz might remind us. Unforeseen consequences resulting from military intervention are the rule rather than the exception. So what happens if this unpopular military campaign lasts weeks and not days? What if American ground forces are introduced into theater to secure loose chemical weapons in Syria? What if America’s action is circumspect, but the consequences of a premature withdrawal from that ongoing conflict come to be seen as a blunder in retrospect?

The repercussions for the country if these scenarios come to pass would be unwelcome, but the political impact of these potential outcomes would be fascinating.

In 2005, just as it is in 2013, Hillary Clinton was the Democratic Party’s presumed presidential nominee. Clinton, who had voted for the Iraq War, faced a weak field of opponents for that nomination. While it was certain that the stubbornly irresolvable Iraq War would be a campaign issue, it was far from clear at the time that the war would become the central issue dominating the Democratic primary process. In spite of his keynote address at the 2004 Democratic National Convention, no pollster was even testing Barack Obama’s name by this point in the 2008 election cycle. By his own admission, he was too young, too inexperienced, to run for the highest office in the land.

All that changed in 2006-2007. As the situation on the ground in Iraq grew worse, the organic surge in support for anti-war movements grew stronger. The Democratic Party courted these voters to successfully manufacture a takeover of both chambers of Congress in the 2006 midterms. The narrow coalition of Democrats which backed Vermont Gov. Howard Dean’s insurgent presidential candidacy in 2004 had grown into the nucleus of a national coalition.

But even with this much writing on the wall, few pundits worth their stripes would have predicted in November, 2006, that Clinton’s support for the Iraq War in 2003 would cost her the Democratic Party’s presidential nomination in 2008. The anti-war movement Democrat had found its redeemer in Obama.

Today, the anti-war Democrat is again set adrift. Abandoned, isolated, lacking a champion, the movement and its members are forgotten. Dean, who is again testing the presidential waters, has backed Obama’s support for intervention in Syria. Clinton and Vice President Joe Biden, too, have expressed their support for war. Of the Democrats actively building a base of support ahead of 2016, only Maryland Gov. Martin O’Malley has not revealed his thinking on Syria. As Bloomberg’s Al Hunt observes, the governor may be gambling on tapping into anti-war sentiment within the Democratic Party to bolster his presidential aspirations. Perhaps a candidate will emerge from the ether to captivate the progressive wing of the Democratic Party.

If history is any guide, the anti-war left will not be without a champion for long. What is appearing more likely is that the Democratic primary process in 2016 will be an interesting one.