The Aughts: A Decade Of “Huh?” 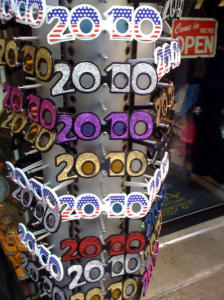 This new decade has snuck up on us. It’s mid-December and only just now has the media world seemed to have awoken to the fact that, wow, we’re about to enter a new decade. I myself had not even realized it until I got an email from Newsweek inviting me to participate in their end-of-decade package. What a difference from ten years ago, when a millennium was drawing to a close and we lived in fear of the havoc to be wrought by Y2K even while we were partying like it was 1999. (I was dreaming when I wrote that.)

By contrast, this year has been so crazy that just chronicling the madness of 2009 has seemed like more than enough work, let alone reflect on the past decade. But part of the import of a passing decade being so overlooked lies to in how un-unified it seemed. The 90s were a big deal because they were so different from the 80s and so different from the 70s. And when we left the 90s behind, we left them for…what? Sure there was Y2k and The Year 2000 and A New Millennium, but beyond that, who knew what to call it? I certainly didn’t and never really called it anything, and certainly not anything generally-accepted or official-sounding (the Oh-Ohs? No-oh.) . In fact, it wasn’t until I started working with Colby Hall, our managing editor here at Mediaite, that I even heard a term for the decade: The Aughts. Flying in the face of our Gmail generation, Colby’s email address is at “aught.com” which I wondered about, asked about, and subsequently learned was what this decade was supposed to have been called. (Colby registered the domain in the late 90s thinking he was sitting on a gold mine. Aw. Read his account of that decision here.)

It was the decade of September 11th, which really changed everything — but even in a world fraught with the scary realities that were made manifest that day, it was also the decade of that world getting so much smaller.

So – The Aughts. As the decade’s close drew nearer it seemed prudent to actually call it something, and the Oh-Ohs, Double-Os and Two-Thousands frankly sound dumb. “The Aughts” is nice, clean, short, simple and definitive, and also sounds vaguely British which means it’s classy. That is why, here at Mediaite, our end-of-decade retrospective series is called…The Aughts. And you ‘aughta’ call them that too! Ha, ha.

But whatever we call them — and none of us agree, which is actually sort of appropriate for the decade in which everything nichiefied and individual opinion gained primacy — there’s obviously no question that they contained multitudes. The Aughts changed the way we lived, and worked, and thought about the present and the future, and became the future way quicker than ever before (Seriously? Just think about the iPhone. A marvel). It was the decade of September 11th, which really changed everything, but even in a world fraught with the scary realities that were made manifest that day, it was also the decade of that world getting so much smaller. For those of you reading this on the go on a little screen on a device you’re holding in your hand, that you will soon use to make a phone call, watch a video, send an email, self-publish your thoughts in an instant or receive any of the above from someone halfway around the world, you know what that means. You’re living it.

There’s much to grapple with in this decade and we’ve invited our staff, columnists and contributors to think about it from any and every angle — politics, movies, music, TV, technology, religion, demographics, art and architecture, fashion, sports, feminism, human rights, science, ridiculous trends like Crocs — and how all of those categories relate to and can be viewed through the media prism. (We’re also accepting submissions so if you have an idea let me know at rachel@mediaite.com.) Lots has happened since we all held our breath waiting for our computers to implode at midnight on January 1, 2000, and we’re already having fun breaking it down for you. (And when we miss something, please do let us know.)

In the meantime, we’ve got 20 days to go until…the Tens? The Teens? The One-Oh’s? Whatever it’s called, by the end of the next decade what we’ve come to take for granted in this one will be obsolete. So please join us in marking it here, before Richard Branson buys it and sends it into space or Mark Zuckerberg just takes it. Enjoy it while it lasts, folks. If there’s anything the Aughts have taught us, it’s that over the next decade, everything is gonna change.