The Best Tweets About Paul Ryan’s Pouty Face at SOTU 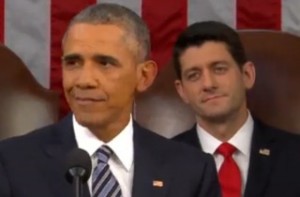 Last night, President Barack Obama gave his final State of the Union address. It was at times moving, at times funny, and always as charismatic as we have come to expect from our Commander in Chief over the last seven years, for better or for worse. Whether it was funny or sad, however, could not be determined by glancing over Obama’s left shoulder at Speaker Paul Ryan. He sat impassively without clapping almost the entire time and people noticed. Oh, people noticed.

Comments and quips came in from all the usual suspects, but as people do in 2016, comedians, celebrities, and cable subscribers across the country took to Twitter to mock the representative and call out his seeming lack of patriotism.

Some people were worried!

paul ryan, are you being held against your will? blink twice if you’re okay. stare straight forward and do nothing if you need rescuing.

Some people got creative!

Some people couldn’t hide that they had their minds on other, more important things!

Some people made astute comparisons!

Paul Ryan’s sour puss face as everyone around him praises Obama’s list of accomplishments. #SOTU pic.twitter.com/Vg7YR1i9eS

Some people had sharp eyes!

Here’s Paul Ryan trying reeeeally hard not to laugh at one of Obama’s jokes pic.twitter.com/gqekuYJ1BF

(This one is my favorite. I want this .gif played on repeat at my funeral.)

Ultimately, some people got fed up.

I couldn’t take it anymore pic.twitter.com/iMKATRp46k

And some people thought the pouty behavior was totally justified.

I can’t say I was disappointed by the president’s speech, but that’s because I wasn’t expecting much. https://t.co/IOVPATMPEu #LastSOTU

Maybe the biggest joke of all, though, is that the whole stunt seems to have been a pre-meditated protest/attention-grab. Check out the tweet Speaker Ryan sent out five hours before his frown went viral:

The president & I don’t agree on much. Might be hard to hide that in my facial expressions. https://t.co/nZSCZljVaK