The Daily Caller Is Absolutely Killing It With White People
COLUMN

The Daily Caller Is Absolutely Killing It With White People 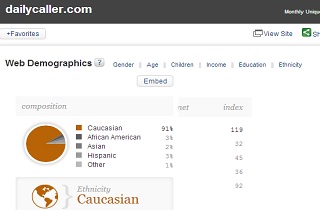 The commie-pinko-libs at Wonkette are in full-on Snarknado™ mode over a news story boasting about the victory of Tucker Carlson‘s The Daily Caller over the liberal media, particularly Politico. I know, I know, but that’s what The Daily Caller calls Politico. Said news story appeared in the virtual pages of The Daily Caller, but who among us has not engaged in a little bit of (not-so) humblebragging? Buried in Wonkette’s super-meaniepants mockery of The DC, though, is a fact that is truly remarkable. According to Quantcast, The Daily Caller‘s readership is 91% white.

The obvious joke here is “The other 9% were made up of Media Matters staffers,” or something like that, but if you’re just interested in bashing The Daily Caller (not that there’s anyting wrong with that), Wonkette covered those bases pretty thoroughly. The Daily Caller is particularly proud of the fact that they beat Politico in Quantcast’s rankings, but Wonkette’s Rich Abdill points out that this is more a function of Politico’s traffic taking a dive than anything else:

So what could possibly have prompted the editorial decision to bump aside actual news from the front page to make room for a big slobbery web-analytics self-smooch, with the hope that no one actually looked at the graphs? Oh, right, they have DEFEATED THE MIGHTY POLITICO. For the year so far? For the past two years? Tell us, Daily Caller:

Quantcast rankings are based on the previous 30 days of traffic for a website.

Oh. Um… that’s not sounding quite as cool. Maybe the Quantcast numbers will look cooler? Let’s go straight to the source, and take screenshots to use for making fun of people:

As fun as it is for liberals to make fun of all things Tucker Carlson-related, beating Politico is, in fact, an accomplishment, so while I’ll laugh along with Abdill, I don’t really begrudge The DC their victory dance. Here’s what I found interesting:

We are not done yet because Quantcast has lots of cool demographic numbers too, and we simply must take a look. What does a Daily Caller reader look like?

I’m not sure how Quantcast knows if readers are white, but The DC chose them for their evaluating purposes, so I’ll go along with it. Given the site’s editorial bent, it’s not surprising that they would skew white, but 91% is a lot (they’re tied with breitbart.com and Drudge). Then again, so is 87%. That’s the percentage of Politico’s audience that Quantcast identifies as “caucasian.” The DC may be slaying Politico in traffic, but they’re neck-and neck with white people.

For perspective, black-centric MSNBC sister site TheGrio.com scores an audience that’s 59% white, and 27% black. Thisweekinblackness.com‘s audience is 60% white, and 25% black. For the record, Mediaite‘s audience, according to Quantcast, is 74% white (tied with MSNBC.com), and 16% black (6 percent higher than MSNBC.com). The internet average is 76% white, and 9% black. They say you always hurt the ones you love, and I love Wonkette, but their Quantcast audience is slightly whiter than Politico’s, at 88%, and considerably whiter than FoxNews.com’s 84%. FoxNews.com’s 84% white audience, meanwhile, is exceeded by DailyKos’ 85%, and Fox edges Kos with black readers, 6% to 5%.

As it turns out, a lot of news media sites overperform with white people, and hell if I can figure out why. It makes intuitive sense that the Big White Three would perform the way they do, but I never would have guessed that Mediaite would have a significantly blacker audience than MSNBC, and nearly double the average. The point is, whatever is driving these disparities, it would pay to figure out why. While black people are slightly underrepresented on the internet, as a percentage of the population, they’re an extremely engaged audience, and very active on the internet. According to Quantcast, black people make up 17% of Twitter users. In a hyper-competitive environment, there are an awful lot of clicks being left on the table.