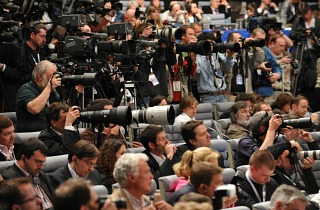 A once unspoken rule within mainstream reporting outlets has recently been exposed and, lacking any other recourse, acknowledged by an honest handful. 2013 has been a year characterized by one scandalous revelation after the other – each had been brewing for months, even years, before they were uncovered. Too often, journalists are consoling themselves and exculpating their dereliction with the fantasy that some allegations deserved to be dismissed outright only because Republicans displayed a conspicuous level of interest in them.

The latest example of this phenomenon is positively amazing and more than a little bit depressing.

Appearing on The Steve Malzberg Show, TIME Magazine senior political analyst Mark Halperin conceded without a hint of reluctance that conservatives’ warnings about “death panels” within the Affordable Care Act was without merit.

Halperin began by chastising the press, as an institution, for doing “nothing like an adequate job in flyspecking and scrutinizing the whole law.”

“Part of the issue,” he said, “is that Governor [Mitt] Romney did not make healthcare the issue in the campaign because he had his own political problems.”

Halperin added that a thorough scrutiny of the ACA in the press would have been beneficial to liberals and President Barack Obama because it would have muted the sense of shock many are experiencing today. Hindsight is 20/20, I suppose.

Moving on to the issue of end-of-life cost controls contained within the ACA, Halperin conceded that those provisions are and always were part of the law. “It’s built into the plan,” Halperin insisted. “It’s not like a guess or like a judgment. That’s going to be part of how costs are controlled.”

“There should have been more scrutiny by all the press, including the conservative press, of the specifics,” Halperin added. “There’s going to be a lot of journalism done, across the board coming up, on this issue, just as there has been now on the issue of whether people with individual plans could keep them. There’s going to be a lot of scrutiny. It should start now.”

This is a noble admission that cuts against interest and Halperin should be lauded for it. But there are no laurels in store for any member of the journalistic establishment. What Halperin is exhibiting is a pervasive and insidious instinct within the East Coast political media complex to abandon their roles as neutral arbiters of competing claims whenever Republicans become too enthusiastic about any given issue.

Journalism professor Richard Benedetto displayed this dubious instinct in May, 2013, in the wake of a stream of embarrassing revelations about the White House’s incompetence leading up to the deadly attack on an American consulate in Benghazi. By displaying his concern about the attack in 2012, Benedetto claimed, Romney had quashed any investigative reporting.

“The former Massachusetts governor made the colossal blunder of jumping out ahead of the president in responding to the attacks,” Benedetto wrote. “By doing that, he made himself a key player in the first news stories about the tragedy.”

He says that Obama escaped culpability in the press for pre-Benghazi blunders because Romney had made himself the focus of the story. “Several reporter questions that followed focused on whether the speed, tone and tenor of Romney’s tough criticisms were appropriate when the crisis was still unfolding and all the facts were not known,” Benedetto observed.

Or, take the unfolding ACA debacle as another example. “Now they tell us,” a November 20 headline in POLITICO blared. The story itself examined all the shocking “tradeoffs” contained within the sprawling, nearly four-year-old ACA.

“Republicans in Congress have been quick to say that they warned of the dangers of the law,” the story conceded. “But the truth is that they sounded the alarms about so many threats, including dubious assertions about death panels and the slippery slope to a Canadian-style single-payer health care system, that they never put any sustained focus on the very specific tradeoffs people are seeing now.”

Halperin is currently validating one of those “dubious” claims as perfectly accurate. The suggestions that conservative media outlets themselves did not perform sufficient investigative reporting or did not myopically focus on only one disastrous outcome of the ACA does not justify the political press abject failure to do their jobs.

If only the GOP could have kept their mouths shut, the alibi goes. Then, as what apparently suffices for logic within the journalistic establishment suggests, the public would have been better informed about the most expansive societal reform in generations. How embarrassingly solipsistic.

Of course, not all journalists or media outlets are guilty of this self-fulfilling prophecy, but far too many are excusing their failures by suggesting that a high level of interest displayed by conservatives in any particular story is enough to sap it of credibility. That is corruption.