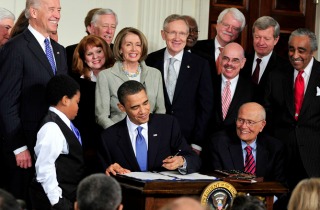 “Whatever the stated reason for the new delay, it is illegal.”

This is the stark verdict of Case Western University School of Law professor Jonathan Adler. Writing in The Washington Post, he notes that President Barack Obama’s administration “is not the first to take liberties with the laws,” but it is doing so with “increasing brazenness” which he finds “disturbing.” Adler is not alone, but he is one of the few to speak out plainly against this administration’s actions.

The administration’s 27th delay in the implementation of the Affordable Care Act, the most overtly political delay yet, designed primarily to insulate the president’s political allies from the voters’ wrath, has sparked some criticism. Most of it, however, has been timid or is emanating from opponents of this president who are easily dismissed.

But these delays are unbecoming of a republican government and worthy of sterner rebuke. They have precedent-setting implications that honest political observers should fear. And this condition is likely to become even more dangerous because it seems that no one has either the means or the desire to do anything about it.

The president’s Democratic allies are content to allow Obama to unilaterally waive or amend portions of the law and ignore Congress’ intent in part because they are unwilling to put the leader of their party in a difficult political position. Congressional Democrats are also loathe to criticize the president’s actions because they make the law less onerous and, thus, improve their own political prospects.

Republicans, meanwhile, are also vexed. Already opponents of the sprawling health care reform law, they, too, approve of Obama’s efforts to mitigate the pain wrought by the ACA. Furthermore, the only tool available to Republican lawmakers to force the president to enforce the law as written, impeachment, is not a politically viable recourse. Recent history shows how the impeaching of a personally popular president can backfire on the mere congressmen and women seeking accountability from such a lofty figure.

Every actor’s hands are tied.

Given this historically unique situation with broad far-reaching implications, it falls on the Fourth Estate to educate the public about the illegality in their midst. The voting booth is the last venue available to enforce accountability on the executive. The press is also abdicating their responsibilities in that regard.

The Washington Post editorial board meekly criticized the administration for their most recent delay. The Post editorial board noted that the administration is now citing the Treasury Department’s ability to alter tax law – a blessing the Supreme Court bestowed on the law two years after its enforcement mechanisms were passed by Congress as “penalties” – as the legal basis for these delays. The Post is not buying it.

“The law is also explicit that the government should be enforcing penalties already; that’s the plainest interpretation of Congress’s intent,” the editorial reads. “The administration shouldn’t dismiss that without exceptionally good reason. Fear of a midterm shellacking doesn’t qualify as good reason.”

“[T]he president should implement the law,” the editorial closes.

This tame effort to critique the president is, apparently, the best America can hope for. The New York Times editorial board, which contorted itself into ideological pretzels in an effort to convince their deflated readers that a CBO report warning that the law will further depress an already low labor participation rate was a good thing, did not even touch the most recent delay.

A handful of intellectually honest columnists, like National Journal’s Ron Fournier and The Daily Beast’s Kirsten Powers, have confessed that they are overburdened by the increasingly untenable task of defending this administration’s actions.

Only the usual suspects, like the Wall Street Journal’s editorial board and conservative columnists like The Washington Post’s George Will and Charles Krauthammer, have called this and other ACA delays what they are: “lawless.”

But their partisan affiliation undermines the righteousness of their argument. The whole of the national political media establishment should be incensed by this administration’s effrontery. Instead, they are complacent. Their collective non-reaction has the cumulative effect of acclimating the nation to the rule of man over the rule of law. It is a condition that should move the honest to weep as the precepts of this, the most successful constitutional republic in human history, are perverted to further the political goals of one man in one fleeting moment. The acceptance of this manner of casual subversion is how republics die.

The press has a job to do and it is failing in its charge. That the majority of respected media outlets cannot even move themselves to justified criticism of this and other illegal maneuvers will be judged harshly by posterity.

A few might awaken to the dangerous precedent they have enabled when Obama is out of office and a new president subverts law in order to expediently pursue a goal deemed sufficiently critical. But the most searing indictments of the next president will be dismissed. The moral gravity of future admonitions will have been greatly diminished by their inaction today.