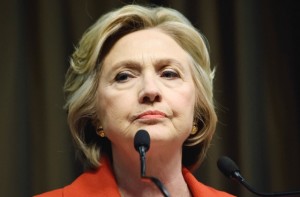 While I have been predicting for over a year that Donald Trump would facilitate Hillary Clinton’s election, it wasn’t “official” until all the debates were over and Trump lost his last chance to change the trajectory of the race. Now that it is “over,” unless and until something dramatic happens to alter that reality, I will be writing most of my columns here based on that premise.

Since we live in an era of such pathetically short attention spans that thirty minutes after something happens it’s already “old” news, it is weirdly fitting that we spend the last two weeks of this endless campaign analyzing what happened before we even really know for sure what that is. With that in mind, I intend use this time period to examine several different aspects of why Hillary Clinton, an incredibly unpopular person of no notable accomplishments, is seemingly going to be elected President of the United States.

There is, of course, plenty of blame to around for this travesty. Today, I want to begin this “autopsy” with the ten media myths (in mostly chronological order and almost exclusively created by the “conservative” media) which caused Trump to be the GOP nominee, thus handing the election to Hillary.

1) John McCain and Mitt Romney lost because they wimped out. The first real domino to fall in this fiasco what the conservative base, with the help of the “conservative” media, grossly misinterpreting why Barack Obama was elected and re-elected. Many conservatives, as a coping mechanism, rationalized that if McCain hadn’t wimped out on “Rev. Wright” and Romney hadn’t done the same on “Benghazi,” then millions of more (white) voters would have been motivated to vote and the outcomes would have different. The reality is that Obama was literally a once-in-a-lifetime talent and media darling who could not have been beaten under the current media environment and cultural demographics, especially after the Iraq War and economic collapse. Tied to this myth is the laughably common notion among conservatives that GOP leaders in Congress are also a bunch of wussies because they somehow can’t get legislation passed without a veto-proof majority.

2) Hillary would be easy to beat. This second gross miscalculation occurred, in part, because coming after “The Natural” Obama, Hillary seems, understandably, incredibly amateurish. She was going to get indicted for her private email server and, if she didn’t, the mysterious disease that she supposedly has would surely do her in. Like seeing your arch-rival finally lose their Heisman Trophy-winning quarterback and being forced to replace him with an un-recruited walk-on, Republicans wrongly thought that they had total flexibility to pick whichever candidate got their juices flowing, instead of one who could simply win. Republican primary voters then decided to choose the highly unreliable Johnny Manziel as their quarterback, because he was just so much fun to watch!

3) Trump is a Republican. One of the keys to this whole con was the idea that Trump was even plausibly a conservative or even a Republican of any sort. Before running, Trump had taken a liberal (often extremely liberal) on nearly every major issue. He had described himself as “more of a Democrat,” had given more money and praise to Democrats (including both Clintons), and tried to run for president as a “Reform Party” candidate. I am completely convinced that had Trump decided to run as a Democrat and won (a possibility) that today Republicans would be lamenting that Hillary would have been so much less awful than he is, and they might have been right to do. Trump’s entire philosophy of life is wrapped up in the “Big Lie” theory and the most critical whopper in his 2016 campaign narrative, which was sold by frauds/sellouts in the “conservative” media, was that he is remotely a Republican who could be trusted on Supreme Court justices.

4) Trump is a very successful businessman. The second pillar of Trump’s false narrative in the primaries was that Trump is some sort of magic man who has a Midas touch in the realm of business. He is supposedly a multi-billionaire (just ask him!) and that this, along with his name being on lots of impressive buildings and the “Celebrity Apprentice” being a hit television show, was proof enough for this premise to be widely accepted without even a hint of real skepticism. But the reality is that Trump’s business record is far from exemplary and is much more accurately described as fraudulent. He has had dozens of failed ventures, some of which were spectacular disasters, he was saved by the banks in the 1990s purely because they thought his name had some value, and he has mostly created the false perception of great success through the creative use of smoke and mirrors while not paying taxes, many of his bills, or giving hardly anything to charity. Had his GOP opponents not underestimated him in the primaries (partly because liberal prediction fraud Nate Silver was telling them not to worry about him) and been afraid to attack him for fear of pissing off his lemmings, this is the area where he should have been exposed like the frantic man behind the curtain in The Wizard of Oz.

5) Trump would change the electoral map. Time and again during the primaries, Trump boasted––with zero pushback from “conservative” media heavyweights––that he would “change” the Electoral College map by winning in “rust belt” states like Michigan and Pennsylvania. He even said that he would be highly competitive in New York and New Jersey while absurdly teasing about Illinois and California. This was going to happen because of his “magic” with so-called “Reagan Democrats.” There was never a shred of evidence that any of this was remotely possible. As even Michael Reagan often says, “Reagan Democrats” are all either dead or already Republican. There is, of course, still a very good chance that Trump can “change the map,” it’s just that it will likely come in the form of turning red Romney states like North Carolina, Georgia, Arizona, Utah, and maybe even Texas, purple.

6) The conservative media is trustworthy. The biggest fallacy among the conservative base is that the media outlets which they trust (Fox News, talk radio, the Drudge Report, etc.) have any vested interest in a Republican becoming president, or any expertise at all in how to achieve that goal. The reality is that the “conservative” media is desperate for ratings and easy content. Trump provided these addicts both of their favorite drugs in huge portions and the “consolation prize” of a Hillary presidency was never any threat to them because at least she will provide them a “boogieman” to attack for four years. The “conservative” media is also horrific at making predictions, just as President Romney will tell you.

7) The polls are undercounting Trump voters. One of the ways in which the conservative media pretended/rationalized that the mountain of polls showing Trump doing poorly against Hillary during the primaries was that the polls were just wrong. There are supposedly millions of “missing” white voters who would come out of the woodwork to vote for a fire-breathing nationalist like Trump. Whenever someone is hoping for a result for which there is no evidence or logic (if voting against Obama wasn’t a motivator enough for someone to vote, then that person is NOT a Republican voter!), people should be very suspicious. But when such a theory comes from people who have just been catastrophically wrong about the very last election, there should be immediate cries of “BS.” Unfortunately, with much of the conservative base their media echo chamber somehow still had enough credibility remaining to produce far too much willful ignorance to be overcome. Amazingly, there are still millions of Trump backers who, enabled by the media frauds, are completely convinced that all the polls are wrong and not only will he will, but that he will do so by a landslide.

8) Hillary is competent and qualified. This is about the only myth on the list which hasn’t been created primarily by the “conservative” media. Instead, it is the “mainstream” news media which has generated this narrative, which is at the very heart of why Hillary will beat Trump. Poll after poll indicates that, by a very wide margin, more voters see Hillary as “qualified” for the presidency. This is presumably because of her long resume as a First Lady, Senator and Secretary of State. While I am convinced that Trump’s “qualifications” are even worse than Hillary’s, I don’t see her as particularly “qualified” either. I look at her career as much like that of former NFL coach David Shula, who had many jobs thanks to sharing a last name with this famous father Don, but who was never remotely successful at any of them, and is seen today as one of the worst head coaches in league history. For example, when asked to list her accomplishments, the best she can seem to come up with is that she was in the room when Osama bin Laden was finally taken out. Seriously

9) Trump would win the debates. This myth, again created by Trump and his “conservative” media sycophants, flows directly from number one on this list. Romney, the theory goes, would have beaten Obama had he just not been way too nice in the second and third debates and let him off the hook on Benghazi. While that was the moment that I knew the election was lost, I do not believe, give the final margin, that his “surrender” on the issue made the difference in the outcome. However, many conservatives, especially those in the media, were determined that this time around we would have someone in the biggest of arenas who would not pull any punches. Trump’s pugilistic performances in the GOP debates were somehow seen as great dress rehearsals for the real deal. However, anyone with a bit of common sense could see that a ten-person GOP debate had about as much in common with a two-person general election debate as the forty-yard dash has with running the mile. Trump was frankly lucky to only be beaten soundly in the three debates and not completely humiliated.

10) Trump could beat the media bias. This one at least made a little bit of sense. The thinking went that Trump, armed with his celebrity, money (ha!), and savant-like abilities of media manipulation, would be able to not only withstand the media’s inevitable attacks on the GOP candidate, but be able to use a good offense and the best defense. Supposedly all the other solid GOP candidates, while they had far less baggage than Trump, lacked the proper weapons for surviving the media’s assault. For a while this theory held up and Trump, with his far greater immunity due to exposure to almost all diseases, amazingly survived viruses which would have easily killed a normal/real candidate. However, in the end, like Davy Crockett at the Alamo, the army amassed against him (and the ammunition Trump provided them) was simply too much for even a gunslinger to survive.

The lesson here, which will surely not be learned, is that while the liberal media will always try to destroy the Republican candidate, it’s probably best to at least force them to make stuff up in order to do so and to nominate a candidate boring enough so there aren’t any ratings in it for them when they try.