There Is No Such Thing As ‘Objective’ Journalism — Get Over It 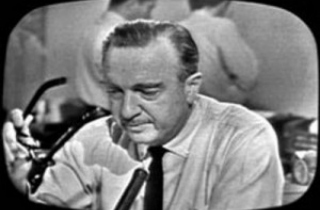 You read that correctly. There is no such thing as objectivity in journalism.

And it’s time to get over it.

Every journalist has a political point-of-view and they don’t magically check that at the door the minute they land a job. Many pretend to pursue some noble cause of pure “objectivity,” but it is truly in vain. Every good journalist is informed about what the subjects they cover and it would be near-impossible to be informed and not have an opinion.

Aside from outright disclosing a political bent (or as we do here at Mediaite, labeling an article a “column”), there are plenty of ways “objective” journalists can unwittingly reveal their biases.

There is also the more indirect form of tipping your hand: selection bias. For example: some would say Fox News’ “hard news” hours spent way too much time harping on the Benghazi attacks over the last month; others would say MSNBC’s “hard news” programming, in addition to all the traditionally “liberal” broadcast network newscasts, outright ignored the story.

You may notice that outlets often accused of conservative bias do tend to focus more on stories that are embarrassing to the left, while dismissing or neglecting stories that could do damage to the right. The same goes for the news outlets generally assumed to be liberally biased.

That’s why we would all be better served if journalists simply disclosed their political biases and abandoned all pretense of the “objective” journalist.

I’ll start: If you read any of my posts labeled as “columns,” you might already know that I am a libertarian. I believe President Barack Obama is a terrible president; and I think Mitt Romney is just as terrible a candidate for replacement. If you read a “column” of mine and you understand libertarianism, you generally know what you are getting.

And when you read a post of mine that is intended to be “straight reporting,” you know what the writer behind the article thinks of his subjects. You can choose to nitpick for bias in my story selection, chosen verbs and adjectives, and characterizations; or you can read it and know that I did my best to be fair despite my own personal views.

Our very own Tommy Christopher and Noah Rothman catch a lot of heat from critics accusing them of “shilling” for Democrats and Republicans respectively. But you know where they stand. They’ve disclosed it on numerous occasions. If you don’t like their viewpoints, you can choose not to click. It’s that simple. And when Rothman writes a “straight” post (Christopher typically only writes columns) you can choose to read it or dismiss it knowing that there is a conservative behind the report.

Of course, if everyone disclosed their political biases, we’d see an even greater degree of what’s been called “media compartmentalization” — more than ever before, conservative readers would stick with conservative journalists; liberal readers with liberal journalists. The so-called “echo chamber” would grow more resonant. People would predictably decry the deeply divided nature of American political media and wax nostalgic for the days where the likes of Edward R. Murrow or Walter Cronkite were the nation’s only source of television news; when few major newspapers and magazines dominated the market.

But those days were likely not as golden as we remember.

Cronkite’s tag line each night was “And that’s the way it is,” which unintentionally says a lot about those days. We had limited sources of news, and those who were “trusted” had the conceit to believe they were presenting the truest form of the story.

Given what we know about how impossible it is to report with pure objectivity, do we really want a single arbiter of information?