This Exists: Gary Coleman Tweets From The Great Beyond 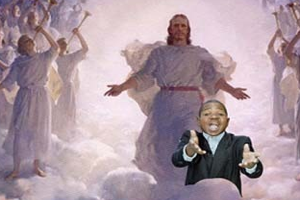 Too Soon? Too soon. Less than a week after the passing of child star Gary Coleman, a Twitter account has sprung up claiming to be “The Official Twitter of Gary Coleman’s Ghost.”

It would seem that the ghost of Gary Coleman wouldn’t really have much to say, since he’s dead, but apparently someone thought it would be funny to tweet at Gary Coleman entering the afterlife. Actually, it reads more like some sort of literature project, or a very specific manifesto on what celebrity Heaven is like (at the very least, the Twitter user responsible for this seems to have liked Coleman, because he places him in Heaven). And when we say specific, we mean “In Heaven, you don’t need to blow into NES games” specific.

According to dead Gary Coleman, Heaven is a bright place where the constant presence of clouds can get you down, but the neverending buffet and poolside dance parties make for an easy fix. It’s also a bit like college– there are keg stands and freshman orientation, and you get assigned a room. There also seem to be open displays of crude sexual behavior between celebrities and icons that made it, of which sometimes Coleman participates. Coleman seems to be a bit obsessed with food and Twitter fame, telling followers “thanks for all the R.I.P.’s.. but what I could really use is a few #FF.” He also has a predictable playful rivalry with the ghost of Dennis Hopper (who also, apparently, tweets).

There are some seriously offensive tweets in the collection, particularly (and weirdly) to civil rights leaders and Jesus, though the overall sense is that the person behind it wasn’t looking to do any harm. But this is a fresh death, and there is a family involved here, as well as friends and loved ones with an open wound who really did not need the tragically early death ridiculed. It may be reassuring to think that your loved one is really enjoying Heaven’s bologne sandwiches. It is not reassuring to see someone dedicate a fake Twitter account to this.