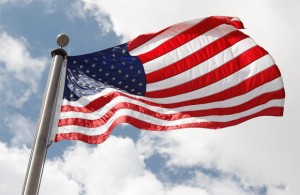 You may remember a story from several months ago about a college in Indiana banning the national anthem because its lyrics were “too violent.” Obviously, this raised many eyebrows and made Goshen College a target for national outrage. Who would imagine the national anthem would be the subject of such controversy? Well, luckily the state of Indiana has legislators who understand just how sacrosanct the national anthem really is.

To give the following story more context, another national anthem-related controversy arising from Indiana this year involved a high school student who decided to put her own musical spin on the national anthem. As a reward for her artistic creativity, the school disciplined her for straying from the original melody, calling it “unrecognizable, unacceptable and disrespectful to soldiers who died for our country. The school eventually issued a public apology, but the fact that this was a controversy even for five seconds was quite mind-boggling.

Now that we have all the proper context in place, let’s direct our attention to Indiana State Senator Vaneta Becker. She is currently pushing for new legislation that would take strong action against those who have the nerve to deviate the national anthem from its intended melodic rhythms.

[Becker] has introduced a bill that would set specific “performance standards” for singing and playing “The Star-Spangled Banner” at any event sponsored by public schools and state universities.

Performers would have to sign a contract agreeing to follow the guidelines. Musicians — whether amateur or professional — would be fined $25 if it were deemed they failed to meet the appropriate standards.

Becker was inspired to write the bill after a constituent contacted her to complain that at a school function, the words to “The Star-Spangled Banner” were changed for the purposes of satire. This did not sit well with Becker at all, for she believes that the national anthem “is [not] something we ought to be joking around with.”

She clarified that the bill is not intended to punish vocalists for singing off-key (this isn’t The Voice, people), its sole purpose is to punish people “who make intentional changes” to the lyrics. But here’s where the bill starts to make just a little less sense:

The bill calls for schools to maintain audio recordings of all performances for two years and develop a procedure for dealing with complaints if a musician is alleged to have strayed from the approved lyrical or melodic guidelines.

“I don’t think it would be very difficult for schools,” Becker said. “You could record it on a lot of cellphones or like a small recording device (or) a CD.”

It’s like Simon Cowell and Big Brother rolled up into one loving basket of legal authority.

So you can make the argument that the national anthem is a sacred part of the American identity and it deserves to be sung the way Francis Scott Key intended it. But music is a form of art, and art has always been and will always be a subjective experience. Painters, performers, and filmmakers have always experimented with cultural traditions in order to give them a new twist, and whether you appreciate it or not is a matter of taste.

In fact, in making her arguments about preserving the artistic integrity of the original song, Becker sounds a lot like Star Wars traditionalists. I know that sounds random, but bear with me. George Lucas famously made some digital alterations to the three original films before they were rereleased on DVD and Blu-Ray, which raised the ire of a lot of Star Wars fans. Hardcore fans organized a boycott of the new releases this year, explaining it was “about film preservation and our cultural heritage.” So if you leave aside the fact that she wants to make her personal beliefs into a law, Becker’s position is not far outside the mainstream when it comes to presenting art as it was originally created.

But what about the forcefulness or the bravado of the national anthem? Would that be called into consideration? For example, when actress Zooey Deschanel sang the national anthem during the fourth game of the World Series this year, she opted to sing it more low-key than past singers. Somehow this inspired outrage, including this gem from Grantland writer Natasha Vargas-Cooper:

Where is the drama of a sweat-drenched Whitney Houston, steeped in struggle, unhinging her jaw to bellow out Our Song? The drums of war echo in her crack-ravaged throat! What the fuck has Zooey DeeDee earned the right to do besides twirl around in a baby doll dress with her face slathered in gluten-free cupcake frosting?

Once again, art is subjective. What’s odd about this particular piece of legislation is not that Becker is trying to infringe on personal liberty, as civil libertarians might phrase it, but that she is trying to infringe on personal taste. Freedom of expression is just as important as freedom of speech, and there’s really nothing horrible about students expressing themselves in a unique way through the national anthem.