The U.S. House Intelligence Committee’s meeting is still underway on Capitol Hill, though the consensus among media and political personalities is that President Trump is getting torn apart over some of his largest controversies.

FBI Director James Comey appeared before the panel on Monday, where he stated that he has not seen any evidence to back up the president’s claim that Trump Tower was wiretapped by his predecessor, Barack Obama. Comey also said at this meeting that the FBI is conducting an active investigation into the implications that Trump’s allies and members of his presidential campaign were in contact with Russian officials during the 2016 election.

Since Trump offered such a forceful prebuttal before the meeting, the Twitterverse is reacting with comments about how things aren’t looking particularly good for him at the moment:

The house is on fire, Trump is running around with a box of matches, and the GOP demands to know who called the fire department.

This hearing SUCKS for Trump. Wow.

The president’s lies about wiretapping by Obama & the British is being blown to pieces by Dir Comey and Adm Rogers. pic.twitter.com/3xhwe5zs9K 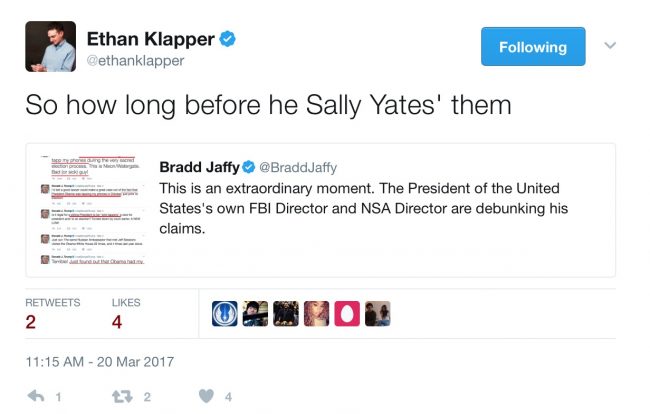 And with Comey’s confirmation, President Trump is now left bare, without any shred of credibility. It is an unfortunate day in the Republic. https://t.co/ktExqg5acd

To believe Trump on wire-tapping at this point, you have to believe that James Comey is lying in a public Congressional hearing.

Sean Spicer, upon realizing he has to do another press briefing pic.twitter.com/SnUgMc6AFo

.@POTUS In light of Comey’s testimony, figured we’d fix this for you. pic.twitter.com/GtAUrvIsUQ