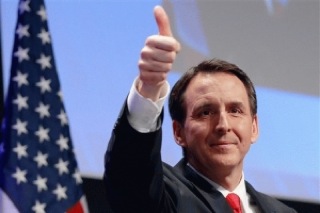 Tim Pawlenty is launching his presidential campaign today with a bang– well, at least a moderate pop. Pawlenty debuted his new campaign strategy on professional contrarian Rush Limbaugh‘s radio show today, and even the guy who demanded an apology from President Obama for killing Osama bin Laden found the move risky: touring the country and preaching the least popular economic policies imaginable to each region. He is comfortable with it, he says, because he is from Minnesota, “the most liberal state in America.”

Pawlenty is perhaps the most unique presidential candidate in the 2012 Republican field, though he manages to achieve this while making sure no one actually remembers who he is. He of the accidentally-launched “good solid Buick™” campaign (sponsored by Ambien and the latest Yanni album) went into the lion’s den with Limbaugh and was treated to relative softballs, which he lobbed back softly. He was given the opportunity to explain conservative-unfriendly comments from many years ago and explain his economic policies, and other topics that feed into his reputation for being perfectly uninteresting. But then Limbaugh asked Pawlenty to elaborate on his promise to “tell America the truth,” and hit on Pawlenty’s plan to tell voters, state by state, the exact opposite of what they want to hear:

“I just gave a speech an hour ago in Des Moine, Iowa, that was entitled “Time for the Truth.” And we took on directly, Rush, what it’s going to really take to solve the debt and the deficit. We called for the phasing out of ethanol subsidies. I’m coming down to Florida tonight to give a speech tomorrow about really reforming Social Security… I’m going to New York the next day and tell them the bailouts and special deals are over.”

Limbaugh, taken a little aback at the idea of telling a state full of farmers he would directly put a dent in their income, naturally asked about the response to that comment. “Nobody applauded at this particular moment of the speech,” Pawlenty admitted earnestly, but he didn’t seem to mind. He explained why after the Pet Shop Boys’ “Always on My Mind” intermission– “I’m from the land of McCarthy, Mondale, Humphrey, Wellstone, Ventura, and now Senator Al Franken… Minnesota is deeply blue and possibly the most liberal state in the country,” he also added (perhaps he wasn’t counting commonwealths?), with a hint of humor about it, that he had “a lot of good practice getting the you-know-what kicked out of me in Minnesota.”

For a campaign strategy wonk, the Pawlenty campaign is turning out to be the most fascinating show of the 2012 campaign. Sure, Pawlenty himself has what could be euphemistically labeled “charisma issues”– though that may be a plus— but the way his campaign has gone about crafting his national image is the most counterintuitive display of selling oneself since Rudy Giuliani ran for president and refused to campaign anywhere but Florida. Pawlenty first attempted to play the game everyone else in the race seems to: sound crazy. That didn’t work, so he spent the past month or so shouting “I’m not crazy!” in the corner of the Republican room while everyone was too busy being angry at Donald Trump and trying to figure out who Mitch Daniels was. And now he has debuted a new prong to his game plan: actively touring America and “telling it like it is,” state by state, by telling people he is going to cut their salaries. Note: this is not an original strategy– Chris Christie spends most of his time as governor of New Jersey nowadays telling teachers he will have to take food off their tables for the greater good– though unlike Christie, Pawlenty isn’t saying this while doubling the number of six-figure salaries in the capital. And, for the first time in this campaign season, Pawlenty is saying something both no one else on the campaign trail dares to, and something that makes people’s ears perk up. It only took debuting a strategy that sounds like deliberate political suicide for people to take notice.

Listen to Pawlenty talk farm subsidies and Minnesota with Limbaugh below (h/t):