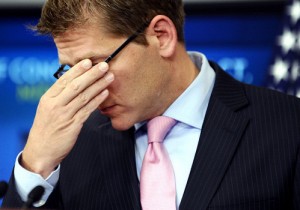 White House press secretaries of the recent past have enjoyed relatively short lifespans, particularly those serving in a second term.

Bill Clinton had three press secretaries in his eight years, George W. Bush had four (Tony Snow—Bush’s third spokesperson—was forced to leave due to an eventually-fatal cancer diagnosis), while President Obama has had two (Robert Gibbs and Jay Carney).

Not a bad resume before age 30.

Carney would go on to become the magazine’s Washington Bureau Chief in 2003, and is known as one of the first journalists to pick up something called blogging before every hack with a keyboard (like me) took it up.

Carney would eventually go on to become Director of Communications for Vice President Biden in 2008, paving the way to the job we can see him perform on a daily (weekday) basis as White House Press Secretary, a job he has performed either exceptionally or horribly, all depending on who you voted for last November.

Over the past few weeks, however, a noticable behavior has manifested itself in Carney’s daily briefings. He has become more testy, more combative, more personal with the White House Press Corps than anyone in his position prior. It seems if any reporter questions this White House—which has arguably experienced its worst month if recent precipitous drops in the polls are any indication—they are attacked publicly and directly.

Example #1: NPR’s Mara Liasson—who has covered the White House for 24 years and therefore should be worthy of at least some modicum of respect—asked whether entitlement reforms exist in the President’s budget offer:

Carney: “Mara, the way you phrase that question makes me think that you’re still working on a typewriter or something.”

Is this what the War on Women looks like?

Example #2: When CBS’ Bill Plante—who has covered every President since before many of you reading this were born (1968)—asked Carney when the President would release a budget (by law, it was supposed to be done no later than February 4th), Carney was outraged:

“I challenge virtually every premise of your question. I don’t know what your question is here,” Carney scolded Plante as if he were an intern for Maxim. “Bill, how long have you been covering Washington?” he continued. “Has there ever been a presidential budget that was enacted, word for word, into law?”

Chuck Todd (NBC/MSNBC) jumped in to defend Plante, informing Carney that a president is always first in introducing a budget before the House and Senate, not last.

“Well, I disagree with that,” barked Carney.

A week prior, Carney went out of his way to mock George Will, whom he shared a roundtable with during Carney’s Time days as a This Week panelist. The spat started when Will stated he didn’t take Carney seriously given his job to spin any news to be favorable to the President. Fair enough…

But Carney, instead of being above the fray, wasn’t having it: “I have a lot of respect for George Will. He’s a very smart guy, and despite the fact that a few days before the election, I think he predicted a Romney landslide very confidently on television — 321 to 217 [electoral votes] for the president, built on a victory in Minnesota, which the president ended up winning by more than 7 percent — I will continue to take George Will seriously.”

Belittling esteemed members of the press is all the rage at 1600 Pennsylvania these days. David Plouffe’s recent tweet about Bob Woodward being washed-up is just one more example:

Here’s what the current roadmap looks like for Carney: Democrats have little chance to win back the House in the 2014. But don’t take my word for it, that’s what the great Nate Silver is saying (and why Silver hasn’t been hired by Jeff Zucker/CNN for Joe Flacco-money yet is one of life’s great mysteries). So with the GOP still in control of Congress after the ’14 elections, Mr. Obama will officially be relegated to lame-duck status, unable to push the grand progressive agenda he covets. And whenever Aflac status is achieved, the existing press secretary usually sells while his/her stock is still high (See: doesn’t hang around).

Of the President’s 454 employees, Carney is one of 21 who receives the maximum salary of $172,000. Good money, sure, but maybe one-sixth of what he could make working in “journalism” again. Rumor has it that MSNBC is hiring former senior members of Team Obama, and the aforementioned CNN (his former home via Time Warner) would sign Carney in a heartbeat. Given his prior (impressive/extensive) experience, his salary would be north of seven figures. Easily.

Given the precedence, there’s no shame in taking the money and running, Jay.

You’ve performed one of the most difficult water-collar jobs in the world for two years with passion and fortitude, but your patience looks to be at an end.

Especially when you can become one of them again.