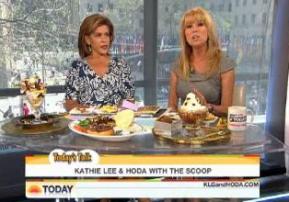 The New York Post broke the news yesterday that NBC News (and Sports) contributor Tiki Barber was leaving his pregnant wife for a former NBC intern.

“We do not want to talk about it because you never want this things to happen in your own family but it has happened,” said Gifford, introducing the topic during the opening segment of the show. “Our colleague Tiki Barber is in the papers yesterday and today quite a bit.”

After Kotb explained the circumstances of the story and laid out both sides, Gifford weighed in with her own Tiki experience. “I never saw any of that,” she said. “We always talked about how much we adored Tiki. He always smelled so good. Now he smells really good.”

We’re not exactly sure where she was going with that, but Kotb chimed right in: “No one smells better than Tiki Barber.”

Good to know. Gifford closed out the discussion with advice (and maybe drawing on her own experience): “I just wish you guys would start thinking about what you’re doing before you do it for once.”

Barber used to contribute regularly to the 10am hour of Today – before Hoda and Kathie Lee took over. He also used to work at Fox News, which the Post reports today was a place Barber tried to make a return last year. They weren’t interested. (No word on his scent when he worked at FNC.)

Here’s the discussion, which leads into a discussion about Tiger Woods (h/t TVNewser):