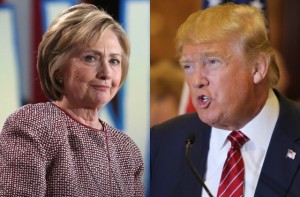 Donald Trump is sharpening his attacks on Hillary Clinton ahead of next week’s Republican National Convention, suggesting today people overestimate her intelligence.

Trump gave an extensive interview to The Washington Post in which he said, “She is highly overrated in the brains department. She is really bad at reacting under pressure.”

The Donald contrasted himself––he says he’s very good under pressure––to Clinton, who he likened to good athletes who “become bad athletes” when the pressure’s on.

Trump is, of course, referring to the multiple controversies that have dogged Clinton in the past few years, from her emails to Benghazi.

Though on the subject of those emails, Trump was criticized last week for not focusing more on them and instead going off on tangents about why that anti-Semitic star tweet wasn’t anti-Semitic and why Saddam Hussein wasn’t all bad. Trump told WaPo why he doesn’t talk about it that much:

Donald Trump explained in a Monday interview with me that he does not spend entire campaign rallies talking about Hillary Clinton’s email controversy because “when you are in front of an audience of 10 to 20 thousand people, you can’t just talk about Clinton email. … They don’t want to hear that…